Home / Blog / What is speciesism and why should we reject it?

What is speciesism and why should we reject it? 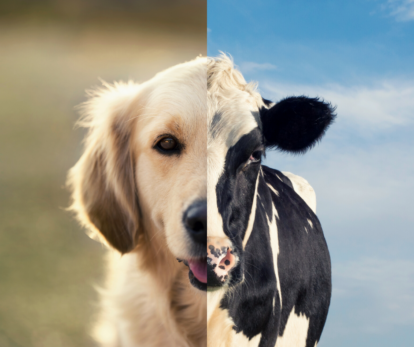 Speciesism is the belief that one species is more important than another.

Predominantly, when we talk about speciesism, it’s within the context of human supremacy, i.e. the view that human needs, desires and interests trump those of any other species.

Fuelled by this belief, the majority of humans are able to justify practices such as farming certain non-human animals for their flesh and secretions, experimenting on specific species in laboratories, exterminating species deemed to be “pests” and imprisoning and displaying non-human animals for entertainment.

The term “speciesism” was first coined in 1970 by psychologist Richard D. Ryder. He wrote:

“Speciesism and racism are both forms of prejudice that are based on appearances – if the other individual looks different he is rated as being beyond the moral pale… Speciesism and racism (and indeed sexism) overlook or underestimate the similarities between discriminator and those discriminated against and both forms of prejudice show a selfish disregard for the interests of others, and for their sufferings.” (Ryder, 1983)

Moral philosophers Tom Regan (The Case for Animal Rights, 1983) and Peter Singer (Animal Liberation, 2015) share Ryder’s view that speciesism is a form of prejudice. Peter Singer describes it as “a prejudice or bias in favour of the interests of members of one’s own species and against those of members of other species”.

But is it enough to see speciesism in this light?

Speciesism as a socially-constructed ideology

He argues that speciesism is not a prejudice (i.e. “an individual predisposition to devalue groups of others”) but an ideology (meaning “a set of socially shared beliefs that legitimates an existing or desired social order”).

Nibert’s central thesis is that a small but powerful economically elite drive the oppression of non-human animals because it serves their material interests.

Members of this economically elite group view all species, including less privileged members of their own, as a resource through which to increase their money, power and ideological control.

Consequently, the exploitation of humans and other animals are intrinsically connected.

As the elite has grown their privilege, Nibert argues that they’ve used it to shape society in their own favour, creating systems and language (including speciesist language) designed to legitimise, rationalise and enable oppression.

Prejudice and discrimination stem from a perceived threat to the natural order, even though the natural order is a social construct designed to protect the privileged (and, therefore, the more likely source of threat!)

This is an important distinction because it means that speciesism is actually the result of our oppression of other animals and not the cause.

There is another layer to speciesism too. This is when humans value one species of our animal kin above another.

For example, most people in the Western world dote on the dogs and cats they care for, often seeing them as family members but, on the other hand, they’re comfortable with pigs and cows being kept and slaughtered in factory farms.

These same people are appalled by the dog meat trade in countries such as China, South Korea, Indonesia and Vietnam, not equating how these dogs are kept and slaughtered with the industrial-scale slaughter of farmed animals happening on their own doorstep.

This aspect of speciesism has a significant cultural component. Non-human animals who are revered in some parts of the world may be seen as food or a pest in another.

Why is it acceptable to exploit, harm or kill some animals but not others?

If different cultures place different value on different species, who decides which one is right?

Supporters of speciesism often justify it by saying that there are clear differences between humans and non-human animals.

Humans, they argue, have greater intelligence, more self-awareness and are more able to choose their own course of action than other animals.

They state that humans are able to think and act morally, which gives them a higher moral status than other species.

Many also believe that any species will naturally put the needs of their own “kind” above the needs of other species.

If, for example, a child and a dog were trapped in a burning building and you could only save one of them, the majority of people would choose to save the human child, not necessarily due to moral considerations but on instinct alone.

This argument is often used to show that speciesism is inevitable.

Some of the flaws in speciesism

Anti-speciesism challenges the above assumptions.

Even if we accept that humans will prioritise their own kind, does it make it morally right to exploit, harm or kill other species, especially when we’ve already seen that the value we place on different species is based on arbitrary criteria?

Let’s take intelligence, for example. We, humans, love to rank and categorise everything. When talking about non-human animals, we often determine their rights in terms of intelligence, specifically as it compares to human intelligence.

Surely though, this logic is deeply flawed.

We know that there are multiple types of intelligence in the natural world. Each species has evolved to excel in certain environments. Bats are experts in echolocation, birds able to flawlessly work out of the complicated mechanics of flying and landing, while humans need machinery to accomplish the same.

Do we measure intelligence by object permanence, tool usage, the ability to plan or build complex social relationships? Many species exhibit some or all of these traits.

Is there a definitive point when a non-human animal is unintelligent enough to justify harming them? What aspects of intelligence should we measure? Who decides?

In his book Are we smart enough to know how smart animals are?, primatologist Frans de Waal gives numerous examples of non-human animals displaying superior intelligence to humans. These include an octopus learning how to open childproof pill bottles, chimpanzees recalling a set of numbers quicker than their human counterparts, and dogs and horses reading human body language cues not noticed by other humans.

So when speciesism talks about humans being the most intelligent life forms on Earth, it’s an assumption based on one type of intelligence – i.e. human intelligence as the reference point – and there are many exceptions to the rule.

Plus, if intelligence is a yardstick for a species’ rights, why do we treat pigs – the fifth most “intelligent” species on Earth – so abominably when they are demonstrably more intelligent (in human terms) than dogs, for example?

This is just one example that illustrates the many injustices and inconsistencies of speciesism.

Anti-speciesism asks whether we humans are really so different from our animal kin.

Darwin proved that humans and all other animals share a common ancestry and evolved under the same mechanisms.

Science and experience show us that non-human animals feel complex emotions such as love, fear, joy, contentment, anxiety and terror. They can reason, communicate, form strong social bonds, enjoy life, suffer, and experience states such as depression when they are prevented from expressing their natural behaviours.

All have a will to live.

If we believe it is morally wrong to torture humans, steal their children or murder them, how can we actively justify causing the same suffering to other species?

If, as speciesists argue, humans are able to make true moral judgements, how can anyone look at a socially-sophisticated species like an elephant being chained and beaten by bullhooks and conclude that it’s a just, moral outcome?

Anti-speciesism is about seeing our relationship with non-human animals and, indeed, the planet in a new light. Instead of seeking dominion over all species, it asks us to be responsible stewards who respect, honour and protect them.

Speciesism is driving us to the next mass extinction

Although speciesism assumes that all other life on Earth is here to serve humanity, nature has other ideas.

We are heading towards the sixth mass extinction in the planet’s history and human behaviour is the ultimate cause. Never has a single species been responsible for so much destruction.

Anti-speciesism recognises that all life on Earth is interconnected. There is a delicate balance between flora and fauna, established over millions of years. Yes, throughout time, some species gradually dwindle to extinction but nature usually has time to replace what’s been lost.

Now, due to human behaviour, too much is happening at once, as evidenced by climate change.

The question is, will humans be able to survive if they continue to decimate other species and their habitats in the name of human supremacy?

The answer is probably not. It’s estimated that portions of the Earth will be uninhabitable before the end of this century.

The only way to turn the tide is to dramatically change how we access and use the planet’s natural resources and how we relate to the other animals that share them.

One framework to do this is inclusive responsibility, which is protective of the rights of all sentient beings to live free from human exploitation, oppression and harm.

As we’ve seen in previous blogs, we also need to change our food systems. The current regime, within which 1.1 million animals are slaughtered every single hour, is not sustainable.

Things we can do to reject speciesism

Speciesism is so deeply embedded in human society that we will have to constantly work to reject it.

So, how can we each make a difference?

Here are a few ideas:

– Be aware of speciesist language and strive to change it – for example, do you refer to yourself as your dog’s owner? Think about how seeing yourself as their carer or guardian would enhance your relationship

– Look at your choices and change the ones that hurt animals

– Go vegan to leave animal-derived products off your plate

– Visit animal-free entertainment and boycott attractions such as aquariums, zoos or circuses

If you believe the world should be a kinder place for all individuals of all species, your voice can help to drive meaningful change.

You can find out more about the anti-speciesist movement on the following websites:

Look out for our upcoming blog on speciesist language.