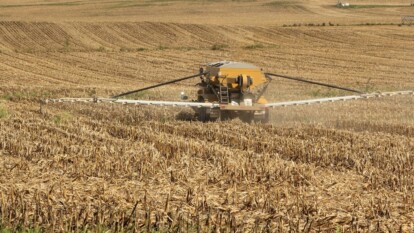 Our food system is broken. That was the conclusion of the Inter-Academy Partnership, involving 130 national academies of science and medicine, back in 2018. At the time, they highlighted rising public health failures and obesity rates, as well as ecosystem degradation as just a few examples. In our recent article about how corporate power is shaping the food system, we saw that 70% of the world’s food is grown by two billion family farmers, often to the detriment of themselves, their families and their communities. One thing we didn’t discuss in any detail was the billions of non-human animals living and dying in horrendous conditions on an industrial scale and what this ultimately means for the planet. Let’s take a closer look.

The industrialisation of agriculture

It’s impossible to talk about today’s animal industrial complex without first understanding how deeply it is tied into the world’s grain supplies. The presence (or not) of grain in a country – and control over where it’s distributed – has long affected the world’s economies. Over the last two centuries, there has been an ever-increasing drive to produce low cost, high-yield crops to inexpensively feed the workforce while making the maximum amount of profit. This provision of cheap food globally can be broadly broken down into three periods of international dominance dating from the 1870s to the present day: British (1870s-1914), American (1940s-70s) and neoliberal (1980s to present). In 1846, for example, Britain off-shored the production of grain and animal flesh to settler states in the Americas, South Africa and Australasia. This placed import and export firmly at the core of the grain industry. Great inequalities were soon apparent. The farmers growing crops were often unable to feed their families as their harvests were designated for remote shores. This can be seen in Berar, western India when more than a million people are believed to have died in the Indian famine of 1899-1900 while 747,00 bushels of grain that could have provided vital food left the region to be exported to Britain.

The US develops a grain surplus

Britain’s decision to off-shore the production of grain and animal flesh in the 1840s meant that the US was a major producer of grain by the turn of that century. By the early 1920s, US agriculture was shifting towards mechanisation and industrialisation. Where farmers had once toiled in the fields with horses and mules, they were now using tractors and combine harvesters. As they no longer needed to produce as much feed for their “beasts of burden”, they converted the land where they’d grown their “labour” crops into so-called “cash crops” such as corn, soybeans and wheat. This quickly led to a large grain surplus and falling prices, putting many farmers out of business. In the 1930s, the US government attempted to address the problems of the grain surplus by introducing price supports and production controls. While this successfully increased farm incomes, it encouraged farmers to intensify their production so they could earn more.

Between 1939 and 1941, neighbouring Mexico suffered serious crop losses due to a fungal disease called “stem rust”. It imported approximately 50% of its grain to meet demand from within the country. To address this, an American scientist and agronomist called Norman Borlaug was enlisted as part of a team working in Mexico to develop new, disease-resistant, high-yield wheat varieties. Borlaug’s work, funded by the Rockefeller Foundation, heralded the start of what’s widely referred to as the “Green Revolution”. It resulted in the development of new so-called ‘high-yielding’ crops that responded to fertiliser and irrigation, were resistant to disease and that significantly increased the number of calories produced per acre of agriculture. Mexico was soon able to feed its own citizens and then become a major wheat exporter, no longer needing wheat from the US. Again, America’s wheat surplus grew. The surplus was further intensified by the end of World War II in 1945 when the US government sought to repurpose as many military supplies as possible. Ammonium nitrate, a main ingredient in explosives, was used as fertiliser, while the ingredients from poisonous gases were used as pesticides. Increased mechanisation and use of chemical fertilisers and modern seed varieties from the Green Revolution (discussed below) led to further grain surpluses in the US.

What was the “Green Revolution”?

The Green Revolution marked a near-complete overhaul of agricultural practices. Borlaug and his team selectively bred plants that were highly responsive to fertilisers and able to use photosynthesis more efficiently. This meant they were less sensitive to day length so could be grown in less sunny parts of the world. In addition, new innovations in irrigation meant that these modern varieties could even be grown in arid climates without being reliant on rainfall. Across the globe, agriculture shifted away from traditionally-grown crops to modern varieties. During the 20th century, many credited Borlaug and the Green Revolution as saving over a billion people worldwide from starvation. He was awarded the Nobel Peace Prize in 1970 in recognition of his contributions to world peace through increasing the food supply. However, this narrative has been challenged by many, e.g. research by historians over the past decade suggests the number of lives saved by the Green Revolution was closer to zero.

The darker side of the Green Revolution

While people once called the Green Revolution a “modern miracle”, time has been less kind. We now know that it has had catastrophic environmental consequences. The drive to only grow a small number of high yield “cash crops” means there is less diversity to fight off diseases and pests. This has led to an over-reliance on harmful pesticides. There has been a huge decrease in biodiversity, topsoil and fresh water. Locally-owned seed systems have been decimated. At the same time, the grain surplus and food abundance has led to an explosion of the human population, placing the planet under increasing strain and upping the competition for resources. By the 1970s, the US was selling food to more than 130 countries, with people increasingly adopting a grain-based diet. This created a food dependency with less industrialised countries relying on exports from more industrialised countries in order to eat. Communities no longer grow or eat their traditional crops. The majority of seeds, which were once freely shared, are now patented, commodified and now grown under the terms of strict licences. The overuse of pesticides has killed off many of the nutrient-rich crops native to a region, sometimes destroying entire ecosystems. Now, we see a growing body of evidence that pesticides may be cariogenic and associated with the growing rates of some cancers.

How the grain surplus impacted the meat industry

Still, the above crises were not necessarily evident in the early years of the Green Revolution. What we can say with certainty is that the world’s grain reserves continued to grow throughout the latter half of the 20th century, especially in the US. But with so much wheat available, profits started to plummet. To stay competitive, farmers took out loans for equipment, agrochemicals and land. They over-planted, needing more crops to make less money, and then increasingly turned to chemical fertilisers, insecticides and pesticides to cope with the resulting soil erosion. More and more small farmers went out of business, leaving larger agriculture operations to fill their place. The influence of these larger corporations grew. The US government didn’t want to reduce the amount of wheat being grown. Instead, they needed a way to use the surplus. Realising that it’s not just humans who consume grain, the corporate powers settled on a solution.

If they could encourage people to eat more animal flesh, there would be demand for more “livestock” animals such as cows, sheep and pigs. And the greater the number of these animals, the higher the demand for cheap, grain-based animal feeds. In addition, animals fed on grain tend to gain weight much quicker, meaning a shorter length of time between their birth and being the right size and weight for slaughter. Again, the way to deal with this faster turnover of “produce” was to convince people to add more animal flesh to their diets. Quickly, consumption of animal flesh skyrocketed. Between 1946 and 1975, for example, the number of cows slaughtered in the US more than doubled from 19 million to 42 million. Across the globe, the production of animal flesh has tripled over the past 40 years and increased by 20% in the last 10 years. People in industrial countries eat nearly twice as much animal flesh as those in less industrialised countries. The Green Revolution not only spread industrialised crop agriculture around the world, it also ushered in a conveyor belt, large scale approach to animal agriculture.

In Part 2 of this article, we’ll be looking at the devastating impact of industrialised meat production and what we can do, both individually and collectively, to create food systems that protect the rights and wellbeing of our animal kin.