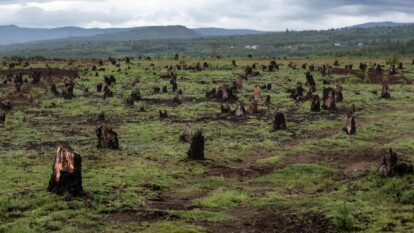 Here, in Part 2, we’ll be taking a closer look at the consequences of industrialised animal agriculture and what we can do, both individually and collectively, to bring about change.

There had been a time when only the wealthy ate beef, due to the costs associated with raising and feeding cows. Indeed, ownership of cows has long been a symbol of wealth and status, particularly in Europe.

Due to the grain surplus and the ever-increasing availability of grain-based feeds, farming cows became far more affordable.

Around the same time, the milk and meat industries successfully lobbied the US Department of Agriculture (USDA) to promote meat and cows’ milk as two of the “Basic Four” core food groups everyone should eat to maintain a healthy diet.

Advertising, marketing and PR messages, as well as nutritional guidelines from trusted bodies such as the USDA, meant that consumers turned to animal flesh in their droves, convinced it was the key to a healthier life.

The fast-food industry rose up to meet demand, using the now-affordable ‘beef’ or cow flesh as the core offering. The “ground beef patty” or hamburger had arrived.

Meanwhile, the cow’s milk industry became so lucrative that its influence grew. Organisations such as UNICEF began to see all children, even those living in non-milk drinking countries, as potential milk consumers, promoting it as nature’s perfect food.

School milk programmes – often led by public/private partnerships with companies such as Nestle and Tetra Pak – sprung up across the globe with US farmers selling 100 million pounds of skimmed milk to UNICEF in 1953 alone.

With this ever-increasing demand for dairy products, dairy farming grew, finding more animals to which to feed the grain surplus.

Time has shown the impacts of industrialised meat production to be catastrophic and unsustainable.

For example, at least 40% of the world’s tropical rainforests has been destroyed since the 1950s to provide pastureland for cattle farming.

This destruction is a major contributor to climate change.

According to the Rainforest Trust, “Tropical deforestation accounts for up to 15% of net global carbon emissions each year. That’s about the same as every car, truck, plane, ship and train on the planet combined”.

The rainforests are essentially the Earth’s lungs. Without them, the planet cannot breathe.

And it’s not just trees that have been destroyed for pastureland. Countless free-living animals have had their habitats destroyed and been pushed to the brink of extinction or are now extinct.

We should remember too that species other than cows are bred for food and slaughtered on an industrial scale.

Other commonly consumed animals include sheep, pigs, chickens, turkeys and ducks. These species once lived in conditions associated with traditional agriculture. Today, they “live” in bleak factory farms and concentrated animal feeding operations.

The corporate food system has intensified and multiplied the degree of suffering inflicted on non-human animals.

The moral cost of animal agriculture

All of the above are arguments typically used to show why large-scale animal agriculture is wrong. It’s bad for the environment and for free-living animals, it would be OK if animals bred for consumption lived in better conditions or were used for regenerative grazing projects.

However, a growing number of people recognise that farming animals in any and all ways turns sentient beings with complex emotional needs into commodities.

How can we be appalled by dogs being killed and eaten in some parts of the world, while being comfortable with other animals being farmed and slaughtered? Is there a difference just because Western culture says those species have always been destined for someone’s plate?

Many suffer to profit the few

As we’ve discussed, our current food system harms the vast majority of humans too.

Despite the increase in global food production, it’s estimated that one in every nine people on the planet is undernourished – a figure that is rising.

Those most likely to be hungry often live in areas with high levels of food waste or where crops are grown for export.

Even when humans and other animals are well-fed, there are growing levels of obesity and health problems directly caused by eating highly processed and animal-based foods.

Farm and slaughterhouse workers across the planet face exploitation, debt, financial insecurity, environmental toxicity and unrest within their local communities.

What can we do?

A growing number of us are asking, what can we do to transform the world’s food system into one that is just for both humans and other animals?

Is it possible to create a fair system that mutually benefits all life on earth? Surely, we have a responsibility to create a food system that protects the rights and wellbeing of non-human animals too.

We must look beyond traditional solutions

Traditional methods to address inequalities in the food system are often a sticking plaster at best.

Most of us will have seen campaigns over the years showing starving children and raising money to send food aid to famine-struck regions. The Green Revolution itself arguably came about through the altruistic intention of feeding the starving.

However, as we’ve seen, the Green Revolution and the industrial paradigm of agriculture it produced certainly didn’t resolve world hunger. In fact, it underpins multiple crises.

Providing food today will not stop people from being hungry tomorrow if the systems around them aren’t designed to nourish them.

Many campaigns aim to change things from the top downwards, which makes sense because the big corporations and governments ultimately control the current systems. Sadly, their priority is profits, not people.

But if we start from the bottom up, does that mean focusing on individual change? If so, how much can we achieve as one person?

As discussed in our earlier blog about the corporate food system, one of the most powerful things we can do as individuals is add our collective weight to the support of grassroots organisations and movements that are working to resist the power of global agribusinesses and reclaim local food systems.

Here are some of the fantastic organisations shaping change:

An independent study by Oxford University found that if enough of us shift to diets that are plant-based and exclude animal products, it could reduce up to 73% of the current food system’s greenhouse gas emissions.

Eliminating animal products from our diets is a clear message to governments around the world that we need farmers to switch to plant-based farming.

Veganic farming is the cultivation and production of food crops that have minimal or zero amount of harm to animals and respects the interests of the environment as well as human health.

This kind of farming avoids the use of chemicals, pesticides or fertilisers made from using produce from confined animals such as ground bones or fish meal.

The Vegan Society has some information about campaigns and initiatives that support veganic agriculture, including how to get involved.

Sentient Media has published a helpful guide to ways in which you can get involved in animal rights activism, become a cruelty-free consumer and support animal rights organisations.

If you or anyone you know is involved with vegan agriculture or campaigns for food sovereignty (or any of the other issues covered in this blog), we’d love to hear from you.