Home / Blog / How corporate power is shaping the food system

How corporate power is shaping the food system 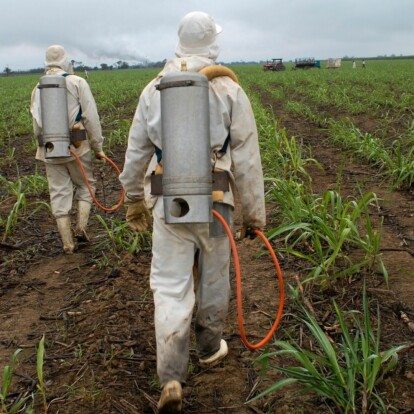 We currently have a globally integrated food system where a handful of transnational food corporations (TNCs) hold the concentration of power.

The food system, as it stands, is driven by short-term gain and comes at a significant and unsustainable cost to humans, other animals and the planet itself.

Who controls the world’s farming and food?

Control of the world’s farming and food industries covers everything from land ownership and the seeds that farmers plant to how food is processed, packaged and distributed.

Even though 70% of the world’s food is grown by two billion family farmers, these farmers have little to no say about what food they grow or how it is used. In fact, most have to obtain a licence to plant certain crops or use technologies owned by private businesses. They’re not able to set prices and many are unable to feed their families with the crops they grow.

There has been a growing number of cases where farmers have been sued by major corporations because patented, genetically-modified plants have been found growing on their farms after pollen blew in from neighbouring farms. It doesn’t matter that the plant was there without the farmer’s knowledge or consent; without the right licence, the farmer faces financially crippling legal action.

This is just one example of the pervasive reach of corporate power.

More broadly, the disparity of the current system is clear when we realise that approximately 60% of the Global Seed Market, which is estimated to be worth 61.5 billion USD, is owned by just three mega corporations.

The same corporations also control 70% of agrochemicals and 100% of transgenic (genetically-modified) seeds.

This monopoly, achieved through a series of mergers, enables these corporations to control what is grown, as well as where, how it’s distributed and to whom.

The consequence of this is accelerated biodiversity loss, contaminated soil and water, inhumane treatment of non-human animals and catastrophic climate change.

It also means that many farmers struggle to earn a fair wage, which directly impacts their families and wider communities.

The high input, profit-driven model of corporate agriculture has also pushed hundreds of thousands of farmers into debt with over 300,000 farmers in India dying by suicide since 1995 due to the devastating impact of this model on their livelihoods.

It’s not just at the level of small, family farmers that corporate power is shaping the food industry.

Food and farming research often supports corporate interests because that’s where funding is available. The consequence is that research emerges that backs corporate agendas, while other food systems and approaches struggle to attract research backing or build evidence to show they work.

In addition, agrifood corporations are frequently the parties that set food and farming standards and regulations. As a consequence, standards deliberately support the big players within the food system, leaving smaller, independent parties vulnerable (see research by Jennifer Clapp and Doris Fuchs (2009)).

As Clapp and Fuchs discuss, “when privately developed regimes are adopted or encouraged by states as a form of “regulation” or given legitimacy by international organisations such as the World Trade Organisation, they take on a broader public significance, even though they were not developed in the public sphere”.

In other words, while regulations may appear to be for the good of the people eating the food, we have to be mindful of the underlying agenda and who it truly benefits.

There are valid concerns that corporate-written regulations may reduce food safety and reduce transparency in the marketplace.

The repercussions go further. With TNCs defining food standards and regulations, they can also shape the world’s economy and politics by driving trade agreements and influencing public debate.

In a healthy economy, multiple firms can sell their goods to multiple buyers in an open and competitive marketplace.

However, if we use the US economy as one example, just four corporations control at least 40% of the market in most agricultural sectors. Economists say that 40% is the tipping point beyond which market abuses are more likely to occur and competition is crushed.

The fact is that our current food system is economically unsustainable long-term.

But as we’ve seen, it’s not just economic sustainability that we need to worry about.

How can we challenge the corporate power shaping the food system?

There is a growing movement across the globe to effect positive change within our food and agriculture systems.

Inclusive responsibility, which we discussed in a recent blog, is an ethical framework which can contribute to this movement.

One key approach is that we all stop seeing ourselves as consumers and become “food citizens” instead. Being a consumer is almost always focused on individual gain and cost/price, whereas a food citizen is someone who recognises that food production doesn’t happen in a vacuum and it must be shaped by what’s best for communities and our wider society.

The reality is that even the eater suffers under the current system. Corporate power is driving up prices and reducing choice, as well as doing nothing to tackle poverty, health crises and injustice.

The established food system is about neglecting the many to benefit the few. We will need to work collectively to flip this paradigm on its head.

Let’s remember that family farmers feed 70% of the world’s population. One way to create change is to actively support the local campaigns tackling the struggles faced by these farmers, especially those designed to protect and reclaim rights to land, seeds and other resources and those fighting for structural change of the corporate food system such as the international peasant movement La Via Campesina.

If family farmers have more autonomy and strength, they will be less at the mercy of the corporate power that currently keeps them vulnerable.

Food cooperatives are another way we can challenge the corporate companies that currently shape the food system. A food cooperative is a food outlet that is run on a not-for-profit basis to give people access to good food at affordable prices.

Although there needs to be a shift away from consumerism, we must recognise our power to create change as consumers within the current system.

Corporations are profit-driven, so we need to make financial impact by refusing to buy unethical products or spending our money with companies that commit to sustainability and ethical practice.

We can demand transparency about how and where products are produced, what workers are paid or how natural resources are protected.

We need to be more engaged with our food systems

The above points are just a few examples of how we can challenge the corporate power shaping our food and agriculture systems.

What’s clear is that we need to become more engaged with the journey from farm to fork. For the sake of convenience, most of us have stopped thinking about how the food we eat is produced. We don’t think about its origin or the steps taken to bring it to our plates.

The planet’s resources don’t just sustain us as individuals. They are the lifeblood of ecosystems, species, communities, our health and wellbeing.

By becoming conscientious, ethical consumers or food citizens we can use our collective influence to play our part in shaping a food system that serves the many, not the few.