Home / Blog / The greatest show? Not for the non-human animals in circuses

The greatest show? Not for the non-human animals in circuses 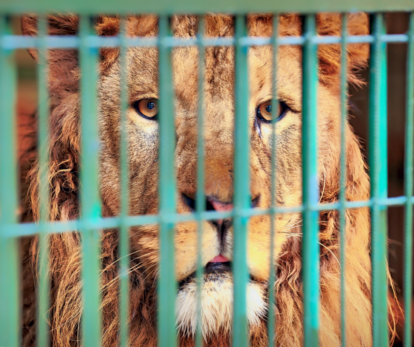 “What do we lose without wild animal acts at the circus? Absolutely nothing, except the opportunity to be haunted and heartbroken.” ~ K. A. Applegate

Throughout the world, thousands of our animal kin are currently destined to live and die in a travelling circus. To date, only 31 countries have banned the use of “wild” animals in circuses, and most countries still allow the exploitation of so-called “domestic” species such as dogs, horses, birds or llamas within the confines of the Big Top.

The use of non-human animals, including free-living species such as elephants, lions, zebras, bears, monkeys, camels and hippos, is still legal in countries including the USA, France, Germany, Spain and Australia.

The many cruelties of circus life for non-human animals

Circus life is dire for a forced non-human animal performer due to a number of factors:

As circuses travel from place to place, all of the captive animals live in temporary accommodation (often dubbed “beast wagons”) that cannot accommodate even their basic needs in terms of freedom to move or express natural behaviours.

Back in 2009, an undercover investigation by Freedom for Animals into the Great British Circus found that elephants were chained up for 11 hours a day, unable to do anything more than shuffle a few paces in their cages. Although that particular circus closed and was bought and reopened by a company that doesn’t use non-human animals, it wasn’t an anomaly.

In November 2021, for example, Chicago Alliance for Animals urged people to take action against Carden International Circus for “many demonstrated incidents of animal cruelty”, including toward two elephants, Betty and Bo, who were found by inspectors with no water, minimal hay and standing on concrete (unsuitable for elephant feet).

These are just two examples from an entire catalogue of non-human animals who would ordinarily roam huge distances and live in bonded social groups being routinely chained or tethered, travelling for thousands of miles by road or rail while barely able to move a few metres.

And it’s not just wild species who are caged in this way. Dogs are routinely tethered and crated to make them easy to transport.

The UK guidelines for transporting horses and ponies say that adult horses can be contained for up to eight hours at a time for transport in individual stalls of just 1.75m2. In a “higher standard vehicle”, they can be transported for 24 hours as long as they’re given water and “fed, if necessary, every eight hours”. The US has similar guidelines.

A consultation into the land transportation of horses in Australia in February 2021 concluded that horses can legally be transported for 24 hours without access to water. Proposed “improvements” to these standards would see horses getting access to water after four hours on the road.

For highly social non-human animals built to graze and walk or run, the sometimes daily routine of moving from one town to another without adequate food or water must be a living hell.

Rules for transporting our animal kin typically cover guidance about when an individual should be able to eat, drink or rest but are less explicit about exercise. Circus companies have long attempted to justify containing non-human animals by arguing that they provide exercise cages and times outside of their travel accommodation.

The reality is that the so-called exercise cages are barely bigger than the cages for travel, if at all. The only other time each animal will step foot outside of a cage will be for rehearsals (often with barbaric training methods – more about this below) or to perform.

Occasionally, the circus might have access to a grass exercise area enclosed by an electric fence, but this can’t be guaranteed with some circuses travelling thousands of miles every year. In these spaces, an animal might be allowed to move around slightly more freely, but they won’t be able to express natural behaviours such as foraging, bathing, socialising or – in the case of predatory species – hunting.

Freedom for Animals reports that the non-human animals kept in circuses often demonstrate “unnatural” behaviours such as rocking, pacing, head nodding and swaying. These are behaviours that speak of stress, frustration and significant mental anguish.

If you look at websites and social media pages promoting circuses, you’ll see that most of them speak proudly about the welfare of the non-human animals in their care. However, there are numerous examples that show captive circus animals are frequently denied adequate veterinary care.

In 2015, for example, a USDA report into Carson & Barnes Circus facility in Oklahoma, US, highlighted veterinary “oversights” that lead to an elephant and pygmy hippo both dying. In addition, elephants were treated without veterinary supervision or approval.

Similarly, Carden International Circus has had a number of complaints filed against it about its failure to diagnose and treat poorly elephants.

How can a ringmaster get an elephant to balance on a ball or a bear to ride a bicycle? It’s certainly not with kindness.

One Green Planet explains that circus trainers routinely use barbaric training tools such as bullhooks, whips, chains and electric prods to coerce non-human animals into performing a wide range of tricks, many of which require unnatural, painful movements. In other cases, our animal kin are deprived of food and water until they perform the required trick.

Video footage from undercover investigators shows how commonplace abuse is within the circus industry. It’s probably because circuses are always on the move that they’re not held to account. It also makes it hard to piece together the sheer scale of this exploitation.

The stress of performance

After hours of isolation, boredom and no outlets for their instinctive needs, our animal kin in circuses are coerced into the Big Top. There they face the roar of crowds, bright lights, noise, activity from the other performers and hostile trainers urging them to perform on cue (and woe betide them if they don’t).

The complete contrast between isolation and the sensory onslaught of performance night is a further source of stress and trauma. Both extremes are completely removed from the natural existence these individuals should have had.

Is there any end in sight for non-human animals in circuses?

There is a growing awareness that circuses are not the greatest show on Earth for the non-human animals performing in them without choice. People are seeing beyond the theatrics to the ugly truth.

In 2019, Magas, the administrative centre of the Republic of Ingushetia in Russia’s North Caucasus, became the first place in the country to ban the use of non-human animals in travelling circuses after its mayor, Beslan Tsechoyev, saw the living conditions the animals were forced to endure.

In January 2020, the UK joined the list of countries that have banned the use of wild animals in travelling circuses. Wales followed suit in December 2020. In January 2022, 100 veterinary experts wrote to the Indian government urging them to ban non-human animals from circuses.

Four Paws International publishes a comprehensive list of the various bans on circus animals around the world.

As you will see, many of these bans only apply to so-called “wild” animals (we prefer the term free living); some specify bans on particular species, and others say a non-human animal can be used by a circus if they were born in captivity.

Bosnia-Herzegovina, Cyprus, Greece, Malta, Guatemala and Honduras are the only countries in the world to ban the use of all non-human animals in travelling circuses. Hopefully, they will continue to model how things should be done.

It’s not that circuses themselves have to come to an end. Human performers have the freedom to choose a life on the road and in the Big Top if this is something they want (as long as they aren’t coerced). Other animals don’t have the same freedom to choose. Their use in these circuses is entirely nonconsensual.

If you want to see an end to the use of our animal kin in circuses, there are many ways that you can help:

Circuses featuring our animal kin cannot survive without an audience. We have the power individually and collectively to demonstrate this.