Home / Blog / Why young people are driving the vegan movement

Why young people are driving the vegan movement 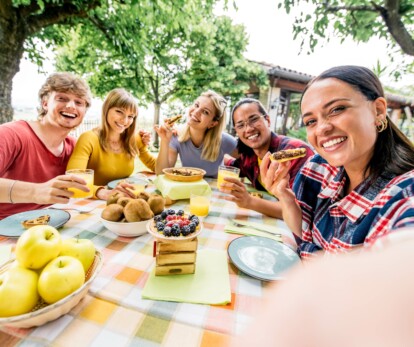 Veganism is a fast-growing movement, and it is younger generations who are leading the way. But why is it that younger people are more likely to be vegan and will it be more than a trend?

Veganism is moving into the mainstream

Currently, it’s estimated that around 79 million people worldwide are vegan; this accounts for about 0.1-1% of the world’s population. While this doesn’t sound like much, other stats suggest a positive move towards the mainstream.

Twelve percent of all millennials (people born between 1981 and 1996) adhere to a plant-based diet, showing that veganism is well represented within this age group.

As millennials tend to be people who are buying and cooking food for their families, it seems that they’re opening up conversations about veganism with their children and modelling a vegan lifestyle.

In the UK, one in eight meals prepared at home is now vegan.

The results of these and other surveys support the observation that young people are more likely to be vegan than anyone over fifty. Indeed, the younger someone is, the more open they seem to be to adopting veganism.

Social research suggests that when 25% of the population adopts a belief or behaviour, it acts as a tipping point pushing it from the fringes to the mainstream. If this is correct, it’s likely that Millennials, Gen Zers (born between 1997 and 2012) and younger will be the driving force that eventually makes veganism as prevalent, if not more so, than a diet that includes animal flesh and secretions.

Young people are concerned about the future

Right now, approximately 70% of the world’s population is trying to reduce how much animal flesh they consume or leave it off the menu altogether, in favour of a plant-based diet.

In part, this figure is a response to 2019’s special report on climate change and land by the Intergovernmental Panel on Climate Change (IPCC). The report described plant-based diets as a major opportunity for mitigating and adapting to climate change and included policy recommendations to reduce the consumption of animal flesh, secretions and other products.

Millennials and younger are certainly worried about climate change.

Another 2021 study – this time of 10,000 young people across 10 countries – highlighted that 60% of those surveyed are either “very worried” or “extremely worried” about climate change and what they see as inaction to address it. More than 50% of all respondents described themselves as ‘sad’, ‘afraid’, ‘anxious’, ‘angry’ and ‘powerless’, a collection of emotions known as “climate anxiety”.

Indeed, 38% of young people in the 18- to 24-year-old age group say that they’re worried about the environmental impact of keeping and killing non-human animals for food. Just 20% of over 55s worry about this issue.

According to the Eating Better Alliance, more than two-thirds of teenagers in the UK say that the environment and climate change are the biggest issues facing the country, putting them above Brexit or healthcare. The Eating Better Alliance also reports that 25% of 18-year-olds are now vegan, choosing to eat plant-based food as a proactive way to make a difference to the environment.

These young people have reached an age when they can vote, live and travel independently. It’s likely that their influence will begin to impact government policy, as well as how we shop, eat and behave.

Already we’re seeing that 60% of UK students want a greater selection of vegan and vegetarian food at their universities and nearly 50% want the food served to be Fairtrade or ethically sourced and produced.

Young people are against animal cruelty

In The Vegan Society’s Teen Hub teens talk about becoming vegan because of welfare concerns for non-human animals. They recognise that there’s a disconnect in society where we see ourselves as “animal lovers” on the one hand but justify widespread brutality against farmed animals on the other. The only distinction between what cruelty the majority of humans see as acceptable is species.

Many young people feel they don’t want to be part of a system that exploits other animals. In fact, the Kellogg’s poll we mentioned at the start of this article found that a third of people go vegan for this reason.

Social media has helped to spread the veganism message, which might be why it’s reaching younger generations rather than older consumers.

Documentaries such as Vegucated, Cowspiracy and Earthlings bring the exploitation of non-human animals into sharp relief. Younger people have usually watched or heard about these and films like them via their social networks or while browsing YouTube.

We live in a connected world

As we saw in our recent article about how youth-led activism is changing the world, younger people have the time and means to explore social justice movements and question the status quo.

The internet brings people together from around the world to grow the conversation. Vegans from different countries can feel part of a single community via forums and social platforms. As well as talking about the ethical and health reasons to become vegan, people are also able to share their favourite plant-based products or recipes.

As 28% of adults say that they found maintaining a vegan lifestyle “too difficult” to make it permanent and 72% of people say it would be easier with the support of their friends or family, it’s clear that having access to information about veganism and a supportive community is crucial to adopting a plant-based lifestyle long-term.

Younger people are arguably more willing to find their tribe online because they’ve always lived in a world connected by the internet.

The power of influencers

The Kellogg’s survey into veganism among young people found that around 4% had been inspired to follow a plant-based lifestyle by celebrities or online influencers.

It’s worth noting that people who adopt veganism to reflect someone they admire often struggle to sustain it long-term. However, looking up to a celebrity or influencer can be a way for people to access more information about animal cruelty or climate change – it depends on how the celebrity concerned is using their platform.

As we’ve seen above, it’s usually these genuine concerns that lead people to decide that being vegan is the only ethical choice.

Younger people will inherit the planet and its problems

It’s predicted that parts of planet Earth will be uninhabitable by 2050 and that there will be a chain reaction of disease and disasters caused by climate change.

Many young people are understandably worried about the planet they stand to inherit and what the future might be like for themselves, their children and grandchildren.

Those millennials who were born in the 1980s had parents who were reeling from the discovery of the hole in the ozone layer by Jonathan Shanklin in 1985. Now, the grim prophecies of climate change are being realised. Having lived with the ever-present threat of environmental disaster, this group is pushing back against the perceived inaction of previous generations and the message is filtering down to younger, more environmentally conscious ears.

The hope is that veganism will hit that crucial tipping point of 25% of the population eventually. It already has among 18-year-olds in some countries. As this age group grows in influence and attitude maybe they can help to create lasting change. It seems like a huge responsibility but they certainly seem ready to rise to it.