Home / Blog / Local food systems: What are they and why are they important?

Local food systems: What are they and why are they important? 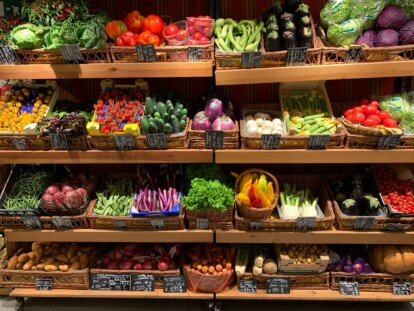 Local food systems represent an alternative to the current global corporate food system by bringing food production back into the hearts of communities for the local community where the food is produced.

In fact, in a local food system, everything from food production, processing and distribution to consumption and waste management happens within a geographic area with a view to enhancing the local environment, economy and society.

Under this model, local consumers pay growers for a share of the total farm produce. In return, the growers provide a weekly share of food of guaranteed quality and quantity.

Within this system, consumers typically pay less for the food they would otherwise buy from a supermarket. Farmers tend to diversify their crops to meet local demands for produce and local consumers often volunteer on the farms they invest in, making the farms more productive.

With a box scheme, people pay to regularly receive a pre-ordered box of food, often produced at a local farm. This might be an in-season organic veg box or a box of fresh ingredients to make meals as laid out on recipe cards, as just two examples.

These schemes aim to build a relationship between the farmer and consumer. There’s an implied promise about the quality and provenance of the food, as well as an understanding that the consumer is supporting the farmers that supply the produce.

In some areas, farmers will work collectively to share knowledge, resources and even produce. This is a fast track to discovering what works and what doesn’t in terms of agricultural sustainability.

It also enables small farmers to have a larger presence by being represented as a group entity.

In urban areas, connecting with “local” farmers can be challenging because there is no direct access to farms or the countryside.

In these situations, consumer groups or cooperatives may reach out to farmers in more rural areas of the region and then act as a food hub that gathers, stores, processes, distributes and markets a range of regionally-produced food.

There are other options for urban food projects too such as campaigning for community food growing spaces in new residential developments, temporary use of land for food growing, street food markets, edible landscapes and more.

In addition, consumer groups and cooperatives may help farmers to connect with nearby shops and supermarkets to sell their produce more widely within the nearby community.

Farmers’ markets enable farmers to sell their produce directly to consumers, ensuring they receive a large percentage of the “food pound” (i.e. the value of the food) rather than a small percentage.

This model enables farmers to better respond to the concerns of consumers, while consumers better understand where their food comes from and the challenges faced by farmers.

As the name suggests, community gardens are growing spaces maintained by people from within the local community. These sites are often open for educational visits from school parties and welcome volunteers, such as unemployed people who want to use their time productively or people facing mental health challenges who want to grow their confidence and self-esteem.

Many experts feel that clear labelling could help people to choose local, sustainable and ethically-produced food. The challenge is that labels have to be supported by widely recognised and regulated standards in order to have meaning.

The idea of a food web is that local, independent shops are deeply connected and can support one another as well as the wider community.

With a food web, people commit to sourcing from other local businesses. For example, a local vegan café or restaurant might use ingredients from a nearby farm or sells pies, soups or cakes made by a local sole trader in their home kitchen.

The “slow food” movement began in Italy in the 1980s as a direct pushback against fast food and everything that represents. Slow food is about putting people and place at the heart of how we eat.

It links “the pleasure of food with a commitment to community and the environment”, championing local food traditions and nearby suppliers.

What are the benefits of local food systems?

Like many community ownership projects, adopting a local food system generates jobs for the community in which it’s based.

People who are working locally and fed by a local food system tend to spend their money locally, keeping it circulating within the community.

This leads to an economic upturn resulting in better leisure facilities, shops, training and education, open spaces and much more.

As areas begin to thrive, it can attract tourism and enrich the local ecosystem. In turn, people may be more inclined to live in and invest in the community.

Ultimately, when communities have a more self-reliant food economy, people tend to want to get involved and contribute to a system that benefits everyone locally. They’re even more likely to adopt dietary behaviours because they feel this will protect individual, environmental and community health.

Local food systems also have significant environmental benefits, not least keeping the use of transportation to a minimum.

Many farmers who sell local food use more environmentally sustainable methods to farm, such as organic methods.

The success of a local food system is rooted in collaboration.

Ideally, it will involve support from policymakers, local and central government, non-profit advocacy, education and research, as well as funders, investors, lenders, incubators and volunteers from within the local community.

Local food systems will usually include a broad mix of formal and informal individuals and organisations, all coming from different perspectives and experience levels.

Of course, with such diverse input, one of the challenges of collaboration is ensuring that everyone has a say.

Why local food systems are so important

Currently, 70% of the world’s food is grown by two billion family farmers. Nearly half of these people are living below the poverty line and face daily food scarcity.

Elsewhere though, food is seen as nothing but a commodity. With little understanding of how food comes from land to larder, people overconsume without considering the consequences.

As such, the global food system creates injustice, poverty and hunger. It harms the environment through biodiversity loss, climate change, and soil and water contamination. It puts the health and, indeed, survival of entire species at risk.

If we are to create meaningful change, agriculture has to become more sustainable.

Farmers need to be able to nourish their communities with healthy, sustainable food. As we’ve seen above, this will open doors to more opportunities, jobs, education and economic growth, as well as starting to heal local ecosystems.

On the flip side, people who have become completely disconnected from how the food they eat is produced will need to become more intentional about what they buy and its wider impact on society.

Local food systems can facilitate this.

There are, of course, some drawbacks or challenges associated with local food systems.

For example, how local is local?

The answer to this question varies hugely across the world and is one of the reasons that some people are sceptical about local food systems.

In the US, for example, the Food, Conservation and Energy Act of 2008 (often referred to as the “Farm Bill”) stated that “local food” could be transported up to 400 miles from its origin.

However, some areas of the US simply require vendors at farmers’ markets to live in the same state as the market, whereas other areas have anywhere from 75 miles to 500 miles as the limit for transport of local produce.

Many experts are worried that more and more products are being labelled as local when they’re not.

Another challenge is how small and localised producers can compete with the largest transnational organisations. This covers wide-ranging considerations such as pricing, high energy costs per unit for smaller producers, or benefits they’re able to offer to employees.

In addition, food regulations are often written in support of corporations and may not adequately reflect the needs of local food systems.

It’s also worth noting that consumers sometimes baulk at paying the prices associated with sustainably produced food. They see the global food system as being more affordable. (“Why go to a farmers’ market when it’s cheaper at the supermarket?”)

In reality, the costs of the global food system are usually externalised and hidden – consumers still pay the price, as do the non-human animals we farm for so-called ‘food’ who pay with their lives. Yes, food might be cheaper at the point of purchase but the costs add up through income lost due to diet-related illness, taxation, adaptations to cope with climate change and more.

It’s rarely the food businesses and practices that cause these health and environmental costs that pay for them!

Local food systems in your area and throughout the world

It’s clear that local food systems have huge societal, environmental and economic benefits for communities. As such, they need to be part of our drive towards creating a truly sustainable food system.

We must be aware of the potential pitfalls though in order to create systems that are fair and sustainable throughout the world.

What can we each do to support local food systems?

– If you can afford to spend a little bit more on local food, then do (remember, it may not be more expensive in the long term)

– Buy local produce, even if you’re in a supermarket (if you can’t find local produce, ask to speak to the manager and let them know you want them to stock local suppliers)

– Visit websites that promote and support local food schemes (if you’re in the US, for example, Eat Well Guide helps you find local, sustainable food; UK readers might be interested in the campaigns currently run by Sustain)

Are you involved with a vegan local food system? Why not add it to the Ethical Globe directory to let others know about the fantastic work you’re doing?