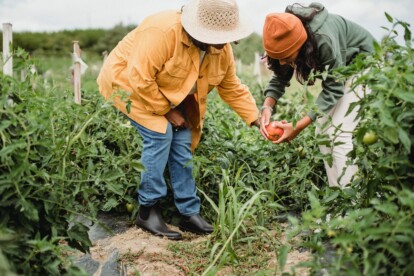 The concept of food sovereignty was first launched at the 1996 United Nations World Food Summit by the transnational social movement La Via Campesina.

This movement represents over 200 million farmers globally and aims to highlight the inequalities in the food system and the struggles of small-scale farmers.

This message remains at food sovereignty’s core but it has evolved as a wider model for food system transformation.

Food sovereignty focuses on the rights of people, rather than corporations, to control how and what kind of food is produced.

Like food justice, it requires all people to have access to healthy and culturally appropriate food but it goes a step further by asserting that communities have the right to define their own food and agriculture systems and that food should be produced through ecologically sound and sustainable methods.

In today’s blog, we’re going to take a closer look at food sovereignty, its key principles and why it has a vital role to play in tackling the world’s ever-growing food crises.

As we saw in our recent article about the corporate food system, the vast majority of the world’s food is controlled by a small number of mega-corporations.

This monopoly represents a massive concentration of wealth and power, almost none of which is held by the people who actually produce the food we eat.

Despite there being enough food produced to feed everyone on the planet, approximately 9.9% of people globally experience hunger and food insecurity on a daily basis.

There are myriad complex reasons for this.

In his 1994 book, The World’s Wasted Wealth 2 (pages 63 & 64), JW Smith of the Institute of Economic Democracy outlines a few examples:

– Less industrialised countries are being used as “appendages”, stripped of their natural wealth to produce food, lumber and other products for wealthy nations

Lower-income countries are particularly vulnerable to the practice of “dumping” food. This is when overproduced food is sold cheaply, or even given as “food aid”, to lower-income countries. Local farmers are unable to compete with the rock bottom prices and are driven out of business and deeper into poverty, further slanting the market share to large producers in higher-income countries.

And so the inequalities and injustices of the food system continue and grow unchecked.

World hunger is on the rise despite the surplus of food.

How can we combat global hunger and environmental degradation in light of the above?

This is one of the pressing questions of our time.

Some people – mainly those who already hold the power – think we need to extend free markets, privatise more resources and protect the current monopolies. Others believe this will only increase the food, health and environmental crises and that a radical change to our food structures is needed.

This represents the predominant food system, a neoliberal model of food enterprise that centres on “free” markets, capitalism, deregulation, and mass global consumption on an industrial scale.

One of the weaknesses of food security as a concept is that it doesn’t distinguish where food comes from, the conditions under which it’s produced, or who or what suffers to provide it.

Can we truly be food secure if it’s to the detriment of human communities, our animal kin and the environment?

Understandably, many people involved in the food movement are concerned that model two could easily be taken over by the major transnational corporations already shaping the food regime, further increasing their influence.

The remaining two models in the Food Model Matrix emphasise a need to move away from the current, unfair food system, recognising that it’s fuelling multiple health and environmental crises.

Model Three focuses on food justice. It’s a progressive movement advocating for investment in underserved communities and addressing the racial and economic/class inequalities and structures that can impact a person’s access to healthy food.

Food sovereignty is at the heart of Model Four. It’s a wider, radical model that seeks to dismantle corporate agrifoods’ monopoly power, create parity, and secure community rights to land, water and seeds as just a few examples.

Meaningful change in the food system will only be possible if the progressive and radical food movements work together.

Food justice, in particular, could swing the balance either way. If food justice organisations work closely with reformist organisations from model two, it could actually strengthen the existing food regime.

If, however, food justice and food sovereignty movements collaborate, it will result in greater opportunities for parity.

As we’ve seen above, there are vast contradictions in the current food system.

Food sovereignty offers a counterpoint to this.

It advocates that we take food control out of the hands of a privileged few and put it into the hands of the world’s citizens.

Instead of competition, it’s about solidarity (we all need food to survive) and responsibility, as well as building food security from the bottom (i.e. most disadvantaged) upwards.

La Via Campesina explains that food sovereignty has “emerged from peasant organisations organised at the transnational level as a proposal for humanity to rethink how we organise food and agricultural production, distribution and trade, how we make use of land and aquatic resources and how we interact, exchange and organise with one another”.

“Food Sovereignty is about systemic change – about human beings having direct, democratic control over the most important elements of their society – how we feed and nourish ourselves, how we use and maintain the land, water and other resources around us for the benefit of current and future generations, and how we interact with other groups, peoples and cultures.”

The six principles of food sovereignty

The food sovereignty movement is built on six core principles (as set out in La Via Campesina’s Food Sovereignty Guide) – it:

1. Focuses on food for people

All individuals, peoples and communities should have the right to sufficient, healthy and culturally appropriate food, including those who are hungry, under occupation, in conflict zones and marginalised. They should also sit at the centre of food, agriculture, animal agriculture and fisheries policies.

Food sovereignty rejects that food is just another commodity or component for international agri-business.

It also rejects policies, actions and programmes that undervalue them, threaten their livelihoods and eliminate them.

Food sovereignty brings provides and consumers closer together and puts them at the centre of decision-making on food issues. Food providers are protected from the dumping of food (see above), while consumers are protected from poor quality and unhealthy food, inappropriate food aid and food tainted with genetically modified organisms (GMOs).

This movement also resists the structures, agreements and practices that depend on and promote unsustainable and unfair international trade and that gives power to remote, unaccountable corporations.

These resources can be used and shared in socially and environmentally sustainable ways which conserve diversity.

Food sovereignty also recognises that local territories often cross geopolitical borders and ensures the right of local communities to use and inhabit their territories.

Food providers in different regions and territories and from different sectors are encouraged to interact positively and to help resolve internal conflicts or conflicts with local and national authorities.

It’s essential to build on the skills and local knowledge of food providers to conserve, develop and manage localised food production and harvesting systems. Food sovereignty aims to develop appropriate research systems to support this and pass on this wisdom to future generations.

In addition, the movement rejects any technologies that undermine or threaten this, e.g. genetic engineering.

Food sovereignty seeks to heal the planet and improve the resilience of ecosystems.

It rejects any methods that harm beneficial ecosystem functions or that depend on energy-intensive monocultures and factory farming, destructive fishing practices and other industrialised production methods, which damage the environment and contribute to global warming.

Note: Food sovereignty is sometimes expressed as seven principles rather than six. You can read these in full here.

While men tend to be visible in agricultural organisations, governing bodies and agribusinesses, women are the hidden workforce, undertaking a huge amount of work and labour.

They are also integral to the maintenance, conservation and development of rural areas, as well as handing down knowledge and traditions.

Currently, women are often unable to access paid employment, transport, basic education, health or care, especially in rural areas. They have traditional, stereotypical gender roles imposed on them and are confined to a subordinate role in private and in public, which acts as a barrier to gender equality and the enjoyment of their rights.

In many ways, the struggle for food sovereignty is also a struggle for women’s rights. La Via Campesina’s members include peasant women from across the globe.

In our view at Ethical Globe, as radical and much needed as food sovereignty is, it doesn’t go far enough to include the rights and interests of our animal kin. Yes, the movement rejects factory farming and industrial fishing but it doesn’t reject the exploitation of other animals.

In part, this is due to food sovereignty’s focus on local food cultures, which may include the consumption of animal flesh and secretions, and resistance to food colonialism.

However, as we’ve touched on in recent blogs about inclusive responsibility and the urgent need for veganic farming, we can’t truly create a sustainable and just food system without recognising the right of other animals to live free from human oppression, exploitation and harm.

All life on the planet is interconnected. If we want to be just for one species, we must be just for all.

An antispeciesist, animal liberationist, vegan ethic is not about imposing a particular diet onto others. Rather, it’s about recognising that we can’t truly expand our circle of moral concern unless we include all species.

We’ve already seen that the food sovereignty movement seeks to promote the rights of women, indigenous peoples and young farmers. Doing so may go against some local cultures and traditions but we still recognise that it’s necessary and appropriate to challenge the status quo.

The same logic applies to the rights of other animals, especially when we recognise that humans are just one species that occupy the planet, not a superior species that all other life functions to serve.

Inclusive responsibility offers a framework for both food sovereignty and animal rights.

Getting involved with the food sovereignty movement

As we can see from this introduction alone, food sovereignty is a complex movement that represents multiple voices. It offers a set of principles from which we can drive change and create a fair and ethical food system.

If you want to find out more about how to get involved, La Via Campesina is a good starting point. You may also want to contact La Via Campesina member organisations (listed on the website) to support local and national initiatives and actions in your region; these might include land occupations, sustainable farm production initiatives, defence of local seeds, actions against GMOs, food dumping and more.

It is also important to lobby local and national governments about food sovereignty.

Do you run a business that is involved in the food movement? Are you committed to selling products that are fair for humans, other animals and the planet?