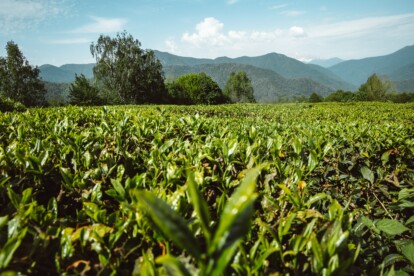 Veganic farming (vegan and organic) has been practised by a small number of farmers over recent decades but there are some compelling reasons we need it to become a mainstay of modern agriculture.

What is veganic farming and why is it so important?

Vegan organic agriculture relates to the production of food without the use of non-human animals or any animal by-products. It also eschews the use of chemical fertilisers, pesticides or other artificial chemicals.

Currently, some food sold as vegan is actually grown using fertilisers such as bloodmeal, fish products, bone meal or manure. Each of these is obtained through the exploitation and consequent suffering of our animal kin.

Below, we’re taking a look at the seven main reasons that we urgently need more veganic farming:

The Earth is in a period of rapid climate change with average temperatures rising as a direct result of human activities.

The planet’s overall temperature has increased by 1.2°C since we started to use fossil fuels to power factories and transport, and to heat our homes. Scientists have pinpointed an increase of 1.5°C as a “safe” limit for global warming but we’re predicted to double this increase by the end of the century, threatening entire species and ecosystems unless we collectively take action.

In 2019, a special report on climate change and land by the United Nations Intergovernmental Panel on Climate Change (IPCC) highlighted plant-based diets as a major opportunity for mitigating climate change.

In fact, the report found that a global shift towards plant-based diets could reduce greenhouse gas emissions from the food industry by up to 70%.

These findings were supported by an independent study by Oxford University, which concluded that even the “lowest impact animal products” cause more environmental damage than that of plant-based substitutes.

Other research backs this up. A 2017 study published by IOPScience found that the farming of flesh and milk from cows, goats and sheep has 20 to 100 times’ greater environmental impact than that of plant-based foods. This research looked at factors such as greenhouse gas emissions, land use and fossil fuel energy use.

These are just a few examples of the ever-growing body of research that concludes we must dramatically reduce meat consumption across the planet if we are going to successfully reverse climate change.

2. To change how we use land

Currently, about 68% of the five billion hectares of agricultural land on the planet is used to rear non-human animals for their flesh and secretions or to grow crops to feed them.

In the UK alone, 48% of the total land is used for animal agriculture and 55% of British cropland is used to grow animal feed.

If farmers were to switch to veganic farming and only grow crops for human consumption, a 2019 study by Harvard Law School found that the UK could meet the calorific, protein and nutrient needs of the entire population using the cropland alone.

If land currently used for grazing and animal agriculture were to be restored to forest cover, it would result in carbon dioxide removal (CDR) from the atmosphere of 3,236 million tonnes CO2, equal to offsetting nine years’ worth of the UK’s current carbon emissions.

Similar benefits could be achieved anywhere in the world by shifting from animal agriculture to veganic farming, reforestation and rewilding.

3. To confront animal cruelty in agribusiness

If the UK population were to be killed at the rate farmed animals are killed around the world, it would end within 11 hours.

This shocking statistic gives us some sense of the scale at which farmed animals suffer and are killed every day.

In an article for The Guardian, historian and author Yuval Noah Harari described industrial farming as “one of the worst crimes in history”.

In this article, Harari talks about the reality that “tens of billions of sentient beings, each with complex sensations and emotions, live and die on an industrial production line”.

As he highlights, the “particular cruelty is not the way in which they die but, above all, how they live”.

Harari also reminds us of Peter Singer’s seminal book Animal Liberation, in which the moral philosopher claimed that “industrial farming is responsible for more pain and misery than all the wars of history put together”.

As both Harari and Singer contend, non-human animals experience fear, pain and suffering. They have complex emotional lives, bonds and social structures.

Any form of farming that results in or benefits from non-human animal exploitation and suffering is morally and ethically unjustifiable.

This is how more and more people are viewing animal agriculture. How can we dote on cats and dogs as members of our family while being comfortable with the industrial-scale suffering and slaughter of other species for the purpose of food?

Veganic farming is about creating food choices that support the health and wellbeing, both mental and physical, of all animals, not just humans.

Demand for non-human animal flesh as food has been growing with the world’s population but not without consequence.

To meet this demand, farmed animals are largely kept in cramped, stressful and unnatural conditions. In the US, for example, 99% of all farmed animals live in factory farms in restrictive, windowless enclosures where they have no opportunities to express their natural instincts and behaviours.

Due to intensive breeding, there is a lack of genetic diversity in factory farms.

These are all factors that make animals more susceptible to disease.

Couple that with the destruction of natural habitats for animal agriculture and, suddenly, wild and domesticated species are in much closer contact.

This has led to the emergence of a greater number of zoonotic diseases, i.e. diseases that can cross animal species, of which COVID-19 is the most recent example.

In fact, three out of four new or emerging infectious diseases are zoonotic, and three out of six of the major zoonotic disease events that have affected public health over the last 100 years have directly involved poultry, pigs and cows, all of which make excellent intermediary hosts between wild animals and humans.

Research shows that human and non-human animal health is interdependent and reliant on healthy ecosystems. The only real way to reduce the occurrence of zoonotic diseases is to increase forest cover and restore ecosystems (see point 5 below). These act as a physical barrier between free-living animals and domesticated animals or humans.

Veganic farming reduces these very real risks to public health by avoiding contact with farmed animals and sparing land that can be restored to its natural vegetation.

Animal agriculture takes up 40% of the planet. To create this space, humans have destroyed entire ecosystems and countless species that live within them.

It’s estimated, for example, that as much as 80% of the Amazon rainforest has already been destroyed and is now occupied by pastures and feed crops.

In the UK alone, ancient woodlands were once the prevalent cover and now account for just 2.4% of the land. In turn, at least 150 species have been lost from British shores in the last 100 years.

But the planet needs trees in order to survive.

Each ecosystem is a complex arrangement of flora and fauna that evolved and adapted to maintain the local environment. Due to animal agriculture, nature’s infinitely clever solutions are being decimated, directly contributing to various climate and health crises.

As we saw in point 1, veganic farming is a proven way to reduce agricultural land use. It offers us a route to rewild significant areas of land, restoring ecosystems and life within them.

The world’s corporate food system is built on complex trade agreements and relies on import and export.

Due to a lack of diversification on farms, most countries would struggle to feed their populations with home-grown produce.

The UK is a perfect example of this.

We currently use just 2.8% of our cropland to grow fruit and vegetables and, instead, import around 80% of the food we eat, if we include ingredients used in food manufactured in the UK.

As consumers, we’re used to buying food regardless of its country of origin or the time of year.

It’s clear that this is a long way from being self-sufficient or food secure.

And let’s not forget the environmental impact of importing produce from the rest of the world. Even vegan food will be environmentally damaging if it’s been transported over thousands of miles or grown in a way that depletes local resources.

The 2019 Harvard Law School report – Eating away at climate change with negative emissions – analysed the US food system and found that configuring cropland from animal feed to 100% human-edible crops would feed an additional 350 million people compared to what the same area of land currently produces.

The same study found that if we took one-third of the UK’s cropland currently used to grow animal feed and switched to crops suitable for human consumption, it would provide 62 million adults with their five-a-day for an entire year – that’s almost the entire UK population!

It’s estimated that around one per cent of the world’s population is currently vegan. This equates to about 79 million people.

But public preferences are changing and veganism is very much in the spotlight.

In a recent survey by Mintel, the top reasons people gave for becoming vegan were:

In its Future of Food Report, Sainsbury’s supermarket predicts that, by 2025, a quarter of the UK’s population will be vegetarian or vegan, and that a further 50% will eat a predominantly plant-based diet.

Worldwide, the sale of plant-based food tripled between 2018 and 2020 and the vegan food industry is estimated to be worth $7 billion USD and rising. Social media is helping to drive this change.

As momentum continues to build and people become more committed to ethical consumption, the need for veganic farming will grow to meet demand.

Do you run a veganic farm or sell veganic farm produce? Why not add your details to the Ethical Globe directory to let others know about the fantastic work you’re doing?