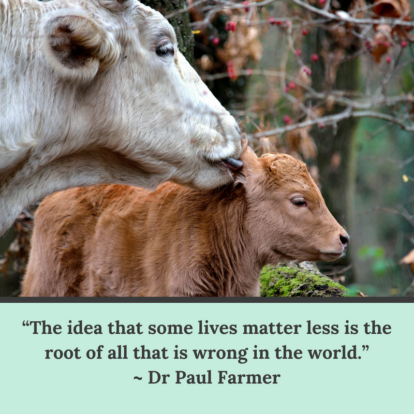 A blog from our co-founder Laila Kassam

I became vegan because I wanted to align my actions with my belief that it is wrong to cause unnecessary suffering to other animals. Once I allowed myself to see the injustice I was supporting, I knew I had to go vegan.

Veganism is a social justice movement for other animals. It seeks to end animal exploitation, reject speciesism and promote animal rights. When I first became vegan it didn’t occur to me that it might have anything to do with other social justice issues. Recently, however, I have begun to realise how interconnected our exploitation of other animals is to our oppression of humans and our destruction of the natural world.

I have come to believe that speciesism is the basic form of oppression in our society. It underpins all other forms of oppression by teaching us to be oppressors from childhood. The mentality required to oppress, exploit and dominate other animals is the same mentality that allows us to oppress, exploit and dominate humans and destroy our planet. In fact, as Will Tuttle argues in ‘The World Peace Diet’, animal exploitation and the mentality it engenders is at the root of much of the oppression and injustice we see in the world (Tuttle, 2005).

While this might seem a stretch at first, the connections become clearer when we look at the history of animal exploitation. According to sociologist David Nibert, our domestication and domination of other animals led to some fundamental value shifts in our society. For much of history, humans foraged, consumed mainly plant-based diets and lived in peaceful and egalitarian communities. This all changed when humans, primarily males, began to hunt large animals. The most successful hunters became more powerful within their communities, leading to the emergence of social hierarchy and a decline in the status of women (Nibert, 2002).

Nibert states that ‘the beginning of systemic human exploitation and social stratification can be traced to the advent of agricultural society in Eurasia roughly 10,000 years ago’. Agricultural systems relied on the exploitation of large social animals who were used as labourers and for their hair, skin, flesh and secretions (Nibert, 2014).

The commodification of other animals and their role as food and stores of wealth led to the rise of a powerful and wealthy elite class who owned the most ‘livestock’. This elite class waged war on others (enabled by the use of horses to transport them to far-off lands) in search of fresh grazing land and water required to sustain large numbers of animals (Nibert, 2002 and Tuttle, 2005). Animal agriculture’s inefficient and intensive use of natural resources is a key reason why it is so detrimental to the environment (Oppenlander, 2013).

This elite class also waged war to satisfy their desire for more animals, wealth and power. The losers of these wars became the property of the victors leading to the institution of human slavery. In addition, women were increasingly viewed as property, just like ‘livestock’.

The origin of capitalism can also be traced back to our exploitation of other animals – the word capital originates from the Latin word capita meaning head of livestock. Tuttle argues that our modern culture is a continuation of the ‘herding’ culture that arose 10,000 years ago with the same belief that other animals are commodities to be owned and used by humans (Tuttle, 2005).

These linkages, explored in detail by Nibert, Tuttle and others (e.g. Jim Mason in An Unnatural Order), suggest a strong historical connection between animal exploitation and violence towards humans and the earth.

The mentality arising from our exploitation of other animals

When viewed in this context, the idea that the mentality required and promoted by animal exploitation is the root cause of many other injustices is compelling. Will Tuttle has distilled this mentality into several linked aspects, summarised below.

Our reduction of sentient beings to mere commodities or objects to be exploited and used for our own benefit has naturally extended to our commodification and objectification of humans and nature. Our culture and economic system view humans and nature as resources to be exploited for its own gain, just like we view other animals. This has resulted in increased competition, inequality, violence and misery.

By consuming the bodies and secretions of other animals we develop the ability to exclude others from our sphere of moral concern. This exclusion is based on arbitrary and morally irrelevant criteria such as species, gender, race or class status. The mentalities of exclusion and domination are fundamentally linked. As Tuttle argues: ‘as dominators of animals we must continually practise seeing ourselves as separate and different from them, as superior or special…..this exclusivism is necessary to racism, elitism and war, because in order to harm and dominate other people we must break the bonds that our hearts naturally feel with them. The mentality of domination is necessarily a mentality of exclusion’ (ibid.).

The suffering inherent in our meat-based diets leads to desensitisation from an early age. Just as we consume the products of violence towards other animals without feeling it, we can contribute to harming other humans and ecosystems without feeling it. An example of this desensitisation and its impacts is seen in slaughterhouse workers. Slaughterhouse employment has been found to significantly increase total arrest rates including arrests for violent crimes, rape and other sex offences compared to other industries (Fitzgerald et al., 2010).

Desensitisation goes hand in hand with disconnectedness. We have been taught to ignore whose body parts are on our plates and the pain and suffering required for them to get there. We have become disconnected from the consequences of our actions. This inevitably leads us to disconnect from the pain and suffering we impose on other humans through our unjust institutions and behaviour that promote war, poverty and food insecurity. Our disconnection from the natural world allows us to forget our dependence on nature, our place in it and the interconnectedness of all its parts.

Awakening from our cultural conditioning

So many of the injustices we are experiencing today are connected by and rooted in the same mentality: our perpetual wars of aggression that benefit a tiny elite while destroying so many innocent lives; our crony capitalist economic system that commodifies humans, other animals and nature and causes increasing poverty and inequality; our degradation of the environment, climate breakdown and mass species extinction of which ‘animal agriculture’ is a leading cause; our oppression of humans through institutionalised sexism, racism, classism, ableism, heterosexism etc.; and the myriad other problems rooted in the social hierarchies entrenched in our psyches and our society.

Our cultural values and mentality have been heavily shaped by our exploitation of other animals. Whether we are aware of it or not, we have internalised this mentality through our inherited meal traditions. We need to wake up from this cultural conditioning if we have any hope of creating a world that is just for all.

Becoming conscious of our conditioning and understanding its origins is the key to changing it. We need to examine, challenge and where necessary replace our inherited beliefs and question the assumptions on which they are based. Only by consciously choosing values such as nonviolence, non-elitism, non-hierarchy, inclusion, justice and compassion for all, can we intentionally and consistently apply them in all areas of life.

As Rumi, Gandhi and many others have told us, we cannot change the world without changing ourselves. Becoming vegan – as the lived expression of non-violence and justice for all – is one of the most meaningful steps towards changing ourselves that I can think of.

Fitzgerald, A.J., Kalof, L. and Dietz, T., 2009. Slaughterhouses and increased crime rates: An empirical analysis of the spillover from “The Jungle” into the surrounding community. Organization & Environment, 22(2), pp.158-184. Available here.

Mason, J., 1993. An unnatural order: Uncovering the roots of our domination of nature and each other. Simon and Schuster.