Collective animal resistance and a shared hope for freedom 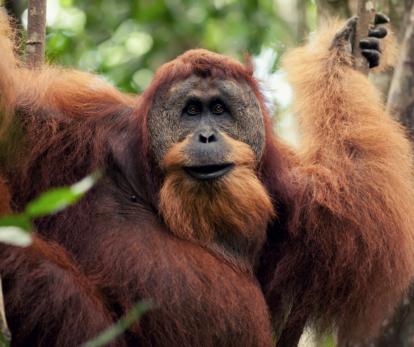 In a previous blog, we introduced the concept of animal resistance and the agency of other animals, and highlighted just a few of the many examples of non-human animals who resisted their captors and acted with a moral conscience.

As we’ll see in this blog, there are also many examples of our animal kin working together for liberation, even if only one or two members of the group stand to benefit.

This is a clear statement of collective animal resistance, especially when otherwise solitary non-human animals choose to collaborate.

In Fear of the Animal Planet: The Hidden History of Animal Resistance, Jason Hribal recounts that when animal traders captured a group of baboons in North Africa, other members of the baboon community chased the traders to the train station and then followed the train for over 100 miles, launching raids on the train at every stop in an effort to free the captives.

The baboons did this at great personal risk for the good of their wider social group. The raids were coordinated and targeted.

Ken Allen was an orang-utan born in San Diego Zoo in February 1971. Despite not knowing a world outside of the zoo, it’s said that Ken resisted life in captivity from the outset. In his nursery, he would unscrew every nut and bolt he could find, breaking out of the room repeatedly.

When he was first moved into the Heart of the Zoo exhibit, he was caught throwing rocks at a television crew that was filming the neighbouring gorillas. When he ran out of rocks, he threw his own poo.

Ken, who once crafted an impressive ladder in his enclosure, made his first successful escape in June 1985 and was found mingling peacefully with zoo visitors. He was placed in solitary confinement and the walls of his enclosure were raised but he managed to escape again in July and then in early August of the same year.

After each escape, the zoo owners modified the enclosure. Young female orang-utans were put in the exhibit. A trainer is quoted as saying that they wanted to turn Ken’s “wanderlust into just lust” but it didn’t work. The zoo started dressing staff as tourists so they could spy on Ken and figure out how he was escaping but he quickly cottoned on to this.

When released from solitary confinement after the August escape attempt, it transpired that Ken was distracting the spies while a fellow inmate, Vicki, was using a crowbar procured by Ken to pry open the molding between two glass panels in a secluded spot of the enclosure in order to give Ken an escape route.

Ken’s efforts to escape were thwarted for several years when San Diego Zoo installed electrified wires around his enclosure. However, in April 1987, the electricity was temporarily shut off for repairs and Ken took that opportunity to escape again.

Had he been watching for the electricity to be shut off or did he risk regular checks? Perhaps he realised the buzz of the electrical current had temporarily stopped. To this day, no one knows.

During his previous escape attempts, zoo staff had always found it easy to coax Ken Allen back to his enclosure but his 1987 escape is said to have been different. He had no intention of complying with his human captors and went on the run within the zoo grounds. Ken was pursued by guards who had permission to shoot to kill if it looked like the orang-utan might attack anyone but, realising he was surrounded, Ken allowed himself to be captured.

Apparently, this wasn’t an entirely peaceful event. It took a group of zookeepers three hours to wrestle Ken Allen downstairs and into his basement holding cell. His frustration was clear to everyone.

Sadly, Ken never managed to find lasting freedom. He was euthanised in December 2000 after becoming ill with cancer but he remains a figurehead for animal freedom.

Kumang was one of the female Borneo orang-utans who San Diego Zoo moved in with Ken Allen to tame his wanderlust. She soon took up the baton as the zoo’s greatest flight risk.

During her first escape, she spent over half an hour exploring the zoo park before visitors reported this unlikely tourist and she was captured.

Zoo officials consulted with expert rock climbers in an effort to figure out how Kumang had escaped her enclosure. The orang-utans were removed from the exhibit while this took place because staff knew they would watch and learn from the rock climbers.

Just eight months after her first escape, Kumang got loose again. This time, she and another female, Jane, used a five-foot squeegee left behind by some window washers as a tool to help them scale the enclosure wall. Jane was sighted watching the flamingos in their enclosure before wandering off to the staff lunch area to down any unfinished soft drinks. Eventually, she was shot with a tranquiliser dart and returned to the exhibit.

Kumang, meanwhile, was found hiding in some bamboos near her enclosure. When she saw the zoo staff had found her, she voluntarily scaled the wall back into the exhibit. This wasn’t without problems as she accidentally returned to the wrong enclosure, finding herself in with Otis, a Sumatran male orang-utan who was Ken Allen’s arch-rival. Otis refused to let Kumang go until another male threatened him. Kumang used the distraction as an opportunity to return to the safety of her own group in the neighbouring exhibit.

Psychologists have noted that, although orang-utans are generally highly solitary when living free, they’ve not only learned to live in groups in captivity but also frequently work together to overcome their environment.

Kumang escaped twice more from her San Diego enclosure. The first time, she was found sitting peacefully among the flowers in a nearby orchid garden and had to be shot with a tranquiliser dart before zoo officials could capture her.

She escaped again the following day, scaling the top of the zoo’s bird sanctuary to watch attempts to capture her from higher ground. Again, a tranquiliser dart brought her down.

Soon after, the zoo discovered that Kumang had developed a rudimentary understanding of how electricity works and had figured out how to ground the hot wire in her enclosure using sticks and pieces of wood. This meant that she was able to use the electrical cables in the exhibit as a rope to escape without being electrocuted.

Other coordinated escape attempts from our animal kin

It’s not just San Diego Zoo that’s seen its share of escapees. There are many other examples of primates, in particular, coordinating their efforts for liberation.

In October 1991, five orang-utans at the Woodland Park Zoo in Seattle worked together to slip through several security doors and scale a high wall. When they were sprayed with high-pressure fire hoses, they held tight to each other to hold their ground. It was only when they were hit with tranquiliser darts that their escape failed.

Similarly, Siabu, Sara, and Busar – orang-utans at Chaffee Zoo, California – worked together to methodically unravel a small section of nylon netting around their enclosure in 2004 until one of them was able to escape.

Clearly, these are not the actions of mindless animals driven only by instinct. These are the actions of individuals collaborating toward the shared goal of freedom.

We’ll be talking more in future blogs about animal resistance and what it means for the animal rights movement, as well as more examples of non-human animals showing they do not consent to be treated as living property.