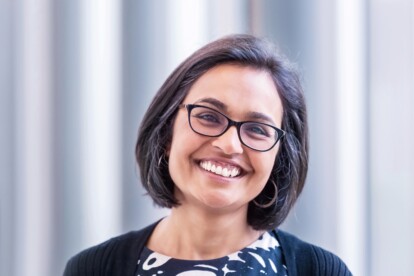 For most people, the first step into veganism starts with a documentary. What The Health and Cowspiracy, for example, have been cited by many as the wake-up calls that made them move away from meat. For Dr. Shireen Kassam, two documentaries caused her to reevaluate her dietary choices: 2011’s Forks Over Knives and 2010’s Fat, Sick and Nearly Dead.

But while many spend two hours engrossed and then maybe start to make a few different food choices, for some, documentaries kickstart a whole new life focus. This was the case for Shireen. She turned off the TV and then promptly decided to tackle the UK’s health system.

Shireen is a haematologist, university lecturer, and founder of Plant-Based Health Professionals UK. With an aim to one day be the biggest nutrition organisation in the UK, the latter is dedicated to education around the role of a whole food, plant-based diet in preventing chronic disease. It also advocates that changing the way we eat benefits animals and the planet too.

Earlier this year, a study concluded that a plant-heavy diet could reduce the risk of dementia. In 2019, another study linked plant-based diets with a lower risk of cardiovascular disease in middle-aged adults. And in February of this year, an Oxford University study found that a meat-free diet may reduce cancer risk by 14 percent. These are just a few examples from the growing body of work that links a plant-based diet with a lower risk of chronic disease and improved quality of life.

“When I started to look into the evidence on diet and health, I was astounded to come across the enormous wealth of evidence supporting a plant-based diet,” recalls Shireen. “I had already been practicing as a doctor for 13 years but had never come across this information before.”

After watching the documentaries, Shireen started researching American plant-based nutrition pioneers like T. Colin Campbell, a biochemist who co-authored “The China Study.” She also discovered Dr. Neal Barnard, the founding president of the Physicians Committee for Responsible Medicine, a US organisation dedicated to plant-based nutrition education with more than 175,000 members.

After four years of research, Shireen knew it was time to fill the same gaping hole in the UK’s healthcare approach, and founded Plant-Based Health Professionals UK.

“I realised that in the UK, other health professionals were equally unaware of the potential benefits of a plant-based diet within clinical practice and this was not a topic that was covered in undergraduate or postgraduate healthcare education,” she notes. “So I decided to create a community interest company dedicated to providing education and advocacy on healthy plant-based nutrition.”

Plant-Based Health Professionals, which has around 1,000 members, aims to serve as a valuable resource for both healthcare professionals and members of the public.

It hosts webinars, news reviews, health videos, and events, and provides free factsheets all about the link between plant-based diets and optimal health, which are sometimes used in GP surgeries. The company has just published a multi-author textbook called Plant-Based Nutrition in Clinical Practice, providing a valuable resource for healthcare and University-based programmes.

Transforming the way we look at healthcare

Shireen’s company is growing by the day, and all of its members advocate for the widespread adoption of a plant-based diet. Connecting with like-minded individuals in this way, she adds, is one of her biggest joys. “It gives us a louder, stronger voice,” she says. “When 1,000 people out there think the same way as you do.”

Ultimately, through her work at Plant-Based Health Professionals and in her role at the University of Winchester, where she runs the UK’s first-ever plant-based nutrition course, Shireen wants to inject a new way of thinking into the heart of the UK’s healthcare approach. In an ideal world, she would like to see the NHS, and indeed the rest of the country, see the true value in disease prevention rather than just treatment.

Right now, she says, only five percent of the NHS budget goes toward preventing illness, and that includes things like vaccinations and smear tests. “We are taught at medical school and postgraduate learning in the ‘sick, disease care model,’ where you’re starting at the point where a person has an illness,” she notes. “But we know that virtually every illness starts decades before that person comes to the doctor.”

What Shireen is hoping for, a bigger budget for preventative diet education and promotion in the NHS isn’t outside the realms of possibility. After all, there was a time when doctors used to prescribe cigarettes for throat conditions.

Whilst waiting for the NHS to change, Shireen has launched a healthcare service, with co-founder and GP Dr Laura Freeman, called Plant-Based Health Online, where people can access preventative healthcare using a lifestyle medicine approach, including support with transitioning to a plant-based diet.

In a country where “meat and two veg” has long been the norm, the everyday consumption of animal products is difficult to unravel. Meat and dairy are seen as part and parcel of everyday life, from the school cafeteria to the hospital to the restaurant to the kitchen table.

When it comes to food, the mindset of many doctors is no different to that of their patients, notes Shireen. “I think everyone wants to conform, don’t they?” she observes.

That said, inch by inch, Shireen and Plant-Based Health Professionals UK are changing the status quo. Shireen works as a consultant at King’s College Hospital, where she has helped to create a more plant-focused food environment with campaigns like Veganuary and No Meat May.

“We’re going to remove processed red meat from the menu, there’s no time scale, but at least we’ve managed to get them to think about it,” she explains. “We’re trying to make them write an executive statement so that all meetings with catering for staff are plant-based. We haven’t got there yet, but that’s our intention.”

Outside of King’s, changing the wider food environment will take time, but it’s one of the most vital parts of Shireen’s mission. “We know people’s choices are mostly dictated by the food environment, and ours is completely broken in terms of what we advertise, what we sell, what’s affordable, what’s accessible to those that are most at risk of chronic conditions,” she says. “It’s not what the science supports, which is healthy plant-based foods.”

As a doctor, Shireen is utterly motivated by her desire to “help people and positively impact their lives.” But she’s also an ethical vegan, an animal lover who cares as much for the animals on factory farms as she does for her two beloved dogs. But for many medical professionals, she notes, there “is a complete disconnect between the health of animals and the health of humans.”

“I feel sad that in a profession where one of the fundamental tenants is ‘first do no harm,’ this is not extended to fellow animals,” she says. “We could achieve good human health whilst extending kindness and compassion to other animals.”

In the UK, there are more than 1,000 “mega-farms,” where animals are kept in cramped, dirty conditions before being slaughtered for meat. One of these is a poultry farm that houses up to 1.4 million birds, another holds 20,000 pigs.

Not only are these conditions inhumane, but they are also a breeding ground for disease. In fact, it’s estimated that three out of four new or emerging infectious diseases are zoonotic, which means they come from fellow animals. To keep outbreaks under control, farmers often give animals antibiotics, which could contribute to widespread resistance one day.

“We all worry about antibiotic resistance, but there’s no dialogue about ‘well should we stop eating meat and stop supporting factory farming?’ or ‘oh gosh, we’re in a pandemic, should we try and stop the next one?’,” says Shireen. “It’s never really brought into the conversation.”

And the way we treat our fellow animals isn’t just a welfare nightmare and a disease risk. It also significantly impacts our health through its contribution to the climate crisis. Everything is interlinked.

Addressing the health crisis and the climate crisis, together

To bring together the issues of health and the climate crisis, Plant-Based Health Professionals is a member of the UK Health and Climate Change Alliance, and works with organisations like Eco Medics and Doctors for Extinction Rebellion. But ultimately, much of the climate issue could be addressed through the organisation’s core mission: changing the way we eat.

“It’s quite clear, even in the NHS narrative, that the climate crisis is a health crisis,” says Shireen. “If you look at the aspects of our society that need to change in order to try and halt this terrible catastrophe that’s happening, we need to address food.”

Just this summer, the UK government food tsar Henry Dimbleby warned that the UK must reduce meat and dairy consumption to meet its climate goals. His warning follows several reports that link the food system with the climate crisis. In April, another report concluded that in Western countries, where animal product consumption is high, meat intake needs to drop by 75 percent for the planet.

And yet, as Shireen points out, “the government hasn’t really endorsed any of the policies for reducing meat and incorporating more plants.” She adds: “Our agricultural system creates foods that we do not need, and very little of what we do actually need to eat.”

She hastens to point out that sustainable healthcare is becoming more common. The NHS was the first healthcare system in the world to declare a climate emergency and has pledged to reach net zero by 2045.

“But the thing is,” she continues, “a lot of time is spent talking about swapping out inhalers, changing anaesthetic gases, energy supply, and travel.”

“People know diet is important,” she adds, “but most organisations as yet don’t have that expertise of what a sustainable diet is, how to incorporate plant-based diets, making it culturally adaptable, accessible that sort of thing. That’s where the resources and education and expertise of Plant-Based Health Professionals seems to be useful.”

It’s quite simple, on the face of it. By changing what we put on the plate, we can improve our own health, reduce disease risk in a multitude of ways, help fellow animals, and mitigate the climate catastrophe. So one thing is for sure, Shireen is not about to give up on a plant-based future. To find out more about her mission and Plant-Based Health Professionals’ resources, click here.