What is ‘vegan’ pottery? 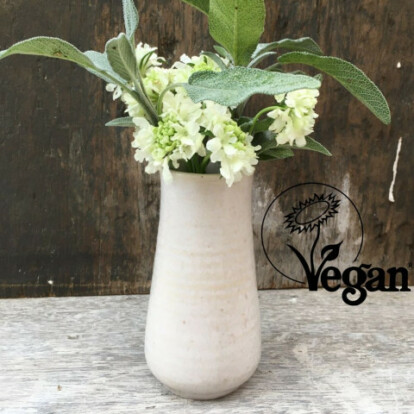 Like many people, I had taken steps to live life in a more environmentally friendly way. As a potter, however, my pottery practice began to feel more and more out of alignment with the other positive changes I had made.

I realised that many of the ingredients and tools I routinely used cause harm to animals, people and the environment. So I made the decision to exclude these from my pottery practice and Oxford Clay – an eco-conscious, vegan ceramics company – was born.

But what is ‘vegan’ pottery?

Essentially, vegan pottery is pottery that is made without animal-based ingredients or tools.

Many people don’t realise that, in pottery, there are several ways in which animal ingredients and tools are used. Below are some examples.

Most people think, “But isn’t clay just dug out of the ground? Surely, that’s vegan?”

The animal bone ash sold by pottery materials suppliers is made by heating bones (usually bovine) in a kiln and then crushing them into a fine white powder.

Bone ash is added to clay to improve its translucency and strength.

Bone china, for example, is made from a combination of china clay, crushed rock, and 50% animal bone ash.

Bone ash is also routinely added to pottery glazes to reduce defects like crazing (characterised by a spider web of cracks penetrating the glaze).

However, bone ash is not an essential ingredient of clay or glaze, and pottery can easily be made without it.

Many potters also use animal-based pottery tools to craft their work. These include:

Chamois leather is often used for smoothing the rims of pots thrown on the wheel.

The bases of pots can also be made flat by twisting them on a piece of damp leather stretched across a board.

However, making leather is extremely resource-heavy.

Over one billion animals are killed each year in the leather industry and the chemicals used in the tanning process are toxic to humans and the environment.

There is no need for potters to use leather when a damp cotton cloth does exactly the same job.

Many non-synthetic paintbrushes are made using animal hairs from animals killed in the fur industry.

The animal rights organisation PETA reports that animals are also killed in the wild for their fur to make paintbrushes. A particular type of brush specifically used in pottery for glazing, called a ‘hake’ brush, is made from goat hairs.

However, many synthetic paintbrushes are available and are in fact more durable and easier to clean than those made of animal hair.

Potters use marine sponge as a tool because it’s so soft and doesn’t misshape their work.

However, marine sponges are classified as animals. They eat and reproduce in the same way as animals and move around as larvae.

What we use as a sponge is the skeleton of the dead sponge after harvesting.

Marine sponges take many years to reach maturity and form an essential part of the marine ecosystem.

Biodegradable cellulose sponges made from plant-based fibres are now widely available and have almost identical properties of marine sponges.

As we can see, it’s perfectly possible and practical to make ceramics without using any of these animal-based tools or ingredients, and therefore reducing the harm caused to animals, people and the environment.