Home / Blog / Aylam Orian, Our Planet. Theirs Too. NARD and the Declaration of Animal Rights

Aylam Orian, Our Planet. Theirs Too. NARD and the Declaration of Animal Rights

Shouting at people doesn’t create a positive change. At least, that’s what vegan advocate and animal rights activist Aylam Orian believes. In fact, one of the most powerful demonstrations he’s ever seen, and the protest that spurred him on to start his own style of activism, was totally silent.

In 2010, Aylam was walking through Madrid when he saw something that hit him “right in the stomach.” A group of people stood in a line with laptops hanging from their bodies. The screens displayed grim slaughterhouse footage. The moment was so poignant and haunting that it prompted Aylam, a passionate vegetarian and soon-to-be-vegan, to restart his own activist journey. Now, he is the founder of prominent US-based animal rights organization Our Planet. Theirs Too.

Inspired by the methods of international nonprofit Animal Equality (the group responsible for the Madrid protest), Our Planet. Theirs Too.’s animal liberation activists now stand quietly on the streets of Los Angeles and other major cities worldwide.

“There is something about the non-shouting, straightforward silent protests,” says Aylam. “The silent approach creates a safe space for people to engage with the visuals. When you shout at people, most won’t stand there and absorb it.”

And it’s really important that people listen. Because, through peaceful activism, Aylam wants to completely transform how people see animals and the food system. It’s his life’s mission. And, while he loves animals fiercely, his motivation stems from more than ending their exploitation. To him, as the grandson of Holocaust survivors, this work also represents a deep and impassioned rejection of humanity’s cruellest side.

Learning from the horrors of the past

Aylam’s grandparents lost most of their family to the Holocaust; his mother’s side was from Romania and Ukraine, and his father’s side was Polish. Growing up in Israel, he has always been reminded of the scars left by one of history’s darkest and most brutal eras.

“The Holocaust ruined [my grandparents] lives forever,” he says. “I grew up in that shadow. In my own family, but also in the entire country of Israel, the Holocaust is present everywhere. You see people with numbers on their hands; you meet survivors; you know people who were in Auschwitz. There’s a national day for the Holocaust. It starts with a big siren, and there is a day of mourning.”

Be it because of his family history or the animals he loves, grief is a consistent presence in Aylam’s life. It’s likely why the quiet, memorial-like animal rights protest that day in Madrid struck such a deep chord within him. But with Our Planet. Their’s Too., he has taken that upbringing rooted in mourning and turned it into a powerful and extremely effective form of protest.

One of the organization’s biggest initiatives is the National Animal Rights Day (NARD), which Aylam founded in 2011 with just one event in New York City. Since then, it has become a huge success. This year, there were around 116 NARD events in cities worldwide, including Mumbai, Beirut, Tehran, Toronto, London, and Rome.

Inspired by Israel’s own national days of remembrance, the first part of NARD sees the quiet, Madrid-inspired memorial ceremony for animals. Sometimes activists hold images from factory farms and other places of animal abuse, but on many occasions, they hold real, dead animals.

This isn’t intended to shock, he insists. But rather assist people in connecting the food on their plates and the animals in front of them. To help them understand that, every year, billions of animals are slaughtered for food worldwide. This, is despite an abundance of research that demonstrates their sentience.

“When most people see a baby cow, pig, chicken, turkey, or marine animals, which we sometimes have, it does something to them,” Aylam explains. “They see the animal and associate a real living being with the meat they eat. They realize: ‘that bacon I like is this animal.’”

Just like people, animals deserve respect. They deserve to be remembered, believes Aylam. “I want to stop all of this violence towards any living being,” he says. “And I want to give animals the same commemoration that we give to people, at least in Israel. That’s what influenced me to do it.”

The second part of NARD isn’t as sombre and focuses instead on educational, fun activities designed to help people go vegan.

But concrete changes don’t just come from in-person activism; they also need written rules and guidance. That’s why Aylam has created a physical document called the Declaration of Animal Rights. Its 4-foot wide paper scroll is so big and detailed and has gathered so many supportive signatures it now stretches out for half a mile.

The Declaration of Animal Rights

In the 1970s, a Universal Declaration of Animal Rights was proclaimed at the headquarters of the United Nations, Educational, Scientific, & Cultural Organization (UNSECO). It was a solid start in terms of laying the foundations for better animal welfare and clearly states that animals shouldn’t be exploited for entertainment. (Hence why bullfighting was rejected from UNESCO’s list of “cultural heritage in need of urgent safeguarding” in 2020.)

However, while the document “hereby proclaimed” that “all animals are born with an equal claim on life and the same rights to existence,” it also lays out guidance on how to kill them humanely for consumption.

This isn’t good enough, says Aylam. So he created his own updated version. “I said, ‘ok we’ve got to come up with a new declaration that is abolitionist and vegan to replace this old declaration,’” he recalls. “I drafted it, and another person helped me edit it, and then we put it on a big scroll of paper.”

Among other proclamations, the document states that “all beings are created equal and have a right to life, liberty, and the pursuit of their happiness.” (modifying the famous line from the United States Declaration of Independence).

At every Our Planet. Theirs Too. NARD event, the document is read out loud and then offered up for people to sign. (There is a virtual version available too.) One day, the group hopes to take it to the UN and to governments to encourage real legislative change, but for now, it’s a way for protestors and spectators to unite behind the cause.

“There’s a big piece of paper in each one of these cities, and people put drawings and poems on it, it’s an outlet for their emotions,” says Aylam. “We continue adding these pieces to the original scroll. Now, it’s about half a mile long. It’s so long that when we tried to film it, it took us two days and we didn’t even finish.”

“We want this document to one day be acknowledged by the UN and every country. Like the Declaration of Human Rights, it will be the basis for laws that will be enacted in different countries, to protect the rights of animals” he adds. 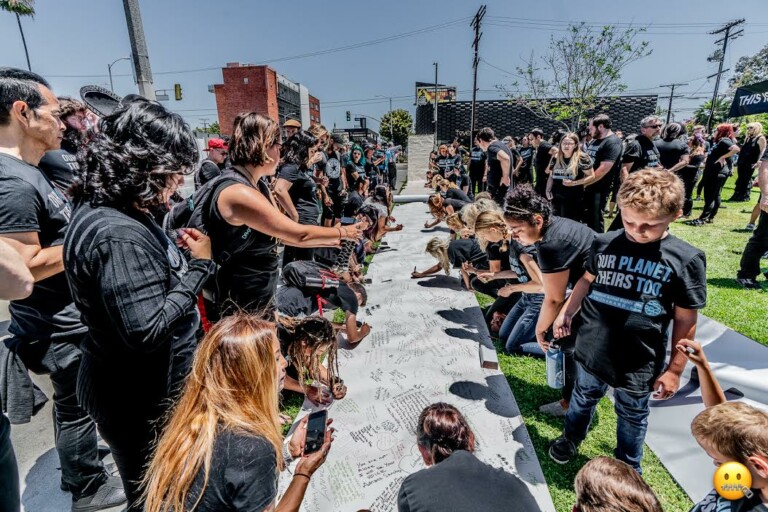 Ultimately, the Declaration of Animal Rights represents hope. That one day, factory farming and all other practices that exploit animals will be a thing of the past. Consigned to the history books.

But while his work is relentless in shaping a kinder world, Aylam doesn’t always find it easy to be optimistic. Because while the vegan movement might be growing, there is no doubt that it is still very much a meat-eaters world. And like anybody who regularly uses social media to share their message, for Aylam, the consistent lack of care, negativity, and trolling can sometimes be too much to bear.

“A photo we posted [from one of our events] a few weeks ago went viral,” he explains. “The reason was because a lot of pro meat-eaters were commenting on it. We’re used to some trolls here and there, but I was seeing hundreds posting typical ‘bacon’ comments. Not just a few internet trolls, but a lot of people.”

“That makes me think, maybe we’re all in a bubble,” he continues. “We’re all trying to reach this sliver of the population that has compassion, and if they only knew the truth, they would stop and go vegetarian or vegan. But maybe, we’ve reached all of them. And the rest that are left, they don’t care.”

But where there is dark, there is light. For every bout of internet trolling, there are others who are positively impacted by what they have seen and want to change their actions. At Our Planet. Theirs Too. events, Aylam says people are frequently moved and emotional, and many want to learn more. He cites another example: a man in Nepal just went vegan after attending the NARD event in Kathmandu.

Undoubtedly, the state of the world requires resilient compassion, even in the face of brutality. It’s a skill that, due to his upbringing and family history, Aylam has mastered to an expert level.

“No matter what, I’ll continue because I know the animals deserve to have a National Animal Rights Day,” he says. “They deserve to be memorialized. So I’m just going automatically. I don’t have a choice. No matter if the world is going vegan or not, I have to continue doing this for the animals.”