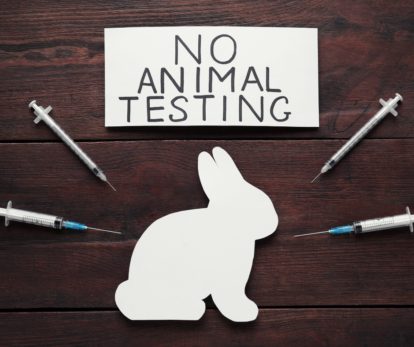 It’s estimated that over 115 million of our fellow animals are used and abused worldwide each year for the purpose of ‘scientific’ experimentation.

They fall broadly into two experimentation categories: basic, i.e., for the investigation of basic biology and human disease, and applied – for drug research and development, toxicity, and safety testing.

According to the Humane Society, experiments using animals such as cats, dogs, monkeys, pigs, rabbits, sheep, rats and horses include causing deliberate organ or spinal damage, force-feeding chemicals, infecting with fatal diseases, inflicting burns, creating high levels of stress by separating a mother from her young, and much more.

Experiments are often excruciatingly painful and can last anywhere from days to years, offering no hope of relief for the individual test subjects. Some animals are killed at the end of a research project so that their organs and tissues can be studied; others are used for multiple research projects.

Advocates of “animal testing” argue that it is essential to discovering the causes, diagnoses and treatments of disease and suffering in humans and other animal species.

But is that really the case?

Animal models are not a good predictor of human responses

In fact, a growing body of evidence shows animal models do not accurately predict human responses.

In 2015, research by Dr Aysha Akhtar, a double Board-certified neurologist and a Fellow of the Oxford Centre for Animal Ethics, titled “The Flaws and Human Harms of Animal Experimentation”, highlighted the FDA’s figures showing that 92% of drugs fail in human clinical trials, despite appearing safe and effective in trials on other animal species.

According to Dr Akhtar:

“More recent analysis suggests that, despite efforts to improve the predictability of animal testing, the failure rate has actually increased and is now closer to 96 percent”.

In particular, she says the main causes of failure are “lack of effectiveness and safety problems that were not predicted by animal tests”.

People often point a finger at the research methodology in these cases. It must have been poorly thought out, biased, used the wrong test subjects regarding age or gender (not species) and so on.

While these may be factors in some studies, the scientific community at large seems unwilling to confront the evidence that testing on other animals can only tell us a limited amount about human responses.

In 2020, Jarrod Bailey from Cruelty Free International and Michael Balls from the University of Nottingham Faculty of Medicine and Health Sciences published their findings that of the 27 scientific breakthroughs using animal testing that were reported in the press in 1995, just one had “clearly resulted in human benefit”.

Several examples of drugs have been tested as safe in clinical trials using our fellow animals, only to cause serious side effects or even death in human subjects. Cruelty Free International gives the following examples:

Some illnesses are unique to humans

Despite the above points, researchers often defend the use of animal test subjects by saying that various animal species provide sufficiently good models of human biology and diseases to give them some relevant information.

However, some medical conditions are unique to the human species. This includes some cancers, Parkinson’s Disease, HIV (Human Immunodeficiency Virus) and mental health conditions such as schizophrenia.

As Cruelty Free International explains, symptoms associated with human-specific diseases have to be “artificially induced in animals in laboratories in an attempt to mimic the human disease”. However, these artificial symptoms don’t account for genetics, socio-economic factors, personal experiences, environmental or psychological issues that can all influence how a human-specific disease behaves.

As a result, treatments for human-specific diseases that seem to show promise with other animal test subjects rarely work in humans. The symptoms are artificial, as are the responses.

One of the most common arguments used to defend experimenting on our fellow animals is that if and when a cure is found for a specific illness, it will benefit multiple species, not just humans.

This utilitarian viewpoint suggests that it’s morally acceptable to sacrifice the few to save the many.

But let’s be realistic – the “few” are almost always animals other than humans, making this very much a speciesist viewpoint.

If scientists proposed experimenting on humans in the same way that we experiment on our animal kin, people would be horrified. We don’t have to look far for an example – consider the stain left on humanity by the unethical human experiments conducted by the National Socialist Party in Germany during World War 2.

Most people agree that it’s unacceptable to carry out experiments that cause – or even risk causing – physical or emotional harm to their human subjects. Indeed, there are laws to prevent this throughout the world.

Why, then, do people see animal testing as the gold standard for scientific discovery?

It’s speciesism in action, ignoring the individual and collective rights of the animals who are used as test subjects or believing that human rights are separate from and superior to the rights of all other animals.

Science shows us that our animal kin are sentient beings. Sadly, this knowledge has often evolved using experiments that caused pain and suffering.

But now the truth is out there, we can’t ignore it.

If our fellow animals are sentient, if they have feelings and preferences unique to them as individuals, and if they are capable of suffering, then we must recognise it is barbaric and unconscionable to use them as subjects for experimentation.

It would be unconscionable even if the science wasn’t deeply flawed.

We humans must look to other methods and models of scientific enquiry, ones that don’t use our animal kin.

There are many rules and regulations designed to protect other animals from cruelty and recognise their rights as sentient beings. The scientific community is lagging.

What are the alternatives to testing on our fellow animals?

We’ll be looking at the alternatives to animal testing in a future blog. As an overview, they include methods that use cell and tissue cultures grown in vitro (outside of a living organism), microorganisms, 3D printing, robotics (including tissue engineering and organs-on-microchips), computer models and designing safe trials using human volunteers.

There are some significant challenges to removing our animal kin from scientific experiments. People must be persuaded to change the tried and tested approaches and then trained in new methodologies – this takes time and resources.

In addition, there are legislative hurdles to jump over to get new testing models approved. Most, if not all, countries currently have laws requiring drugs or medical treatments to be tested on other animals in clinical trials before they can be approved. The entire system will need an overhaul.

In a coming blog, we’ll explore what we can do individually and collectively to support the development of new testing models and technologies and to let the scientific community know that animal testing needs to stop.

Although we have a long way to go to free our animal kin from laboratories forever, there is hope.

“They more closely mimic how the human body responds to drugs, chemicals and treatments; they are more efficient and often less expensive, and they are more humane”.