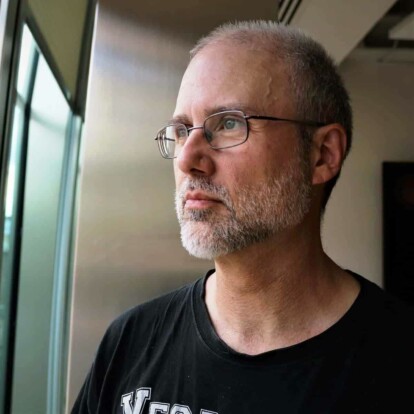 Jordi Casamitjana is a UK-based Catalonian writer, vegan activist, animal rights campaigner, and zoologist who has dedicated his life to the protection of all living beings and the advancement of veganism. But, while his career has been quite the journey—he has helped to tackle illegal fox hunting, ban bullfighting, and in 2020, he won a landmark case that ruled ethical veganism as a protected belief under the Equality Act 2010—it all started with one animal. But they weren’t a primate, a pig, or a dog, as you might expect. No, Jordi’s compassion and connection to animals came from a wasp’s nest.

Finding compassion in a wasp

When he was thinking about career moves, Jordi knew he had to choose a profession that would allow him to be out in nature, working alongside free-living fellow animals. He started off with a biology degree before specialising in zoology and finally landing on ethology, which is the study of animal behaviour. It was then that he was asked to zone in on one particular wild animal, and he chose social wasps.

Wasps are not easy to research. Needless to say, they’re not very easy to get close to unless you want to risk a nasty sting. Jordi wasn’t put off, but he was nervous.

“This particular species, they have guards outside,” he explained. “They leave a pheromone that says something is happening, and all the wasps come.”

But when he found a nest to approach for his studies, something unexpected happened. The “guard wasp” gave him a free pass to move closer:

“I was thinking ‘What is she going to do? Is she going to raise the alarm?’ I was completely frozen,” he recalls. “I could see her scanning, assessing, moving the antenna, trying to smell me, trying to assess my intentions. And she decided ‘you’re ok, you’re not a danger.’”

The wasp, Jordi realised, had understood him. She had judged him correctly: he wasn’t a threat or an enemy but a curious human being. She was an insect, but she had shown him compassion. And for a young Jordi, this felt extraordinary. He had connected with an insect in an instant, but throughout his life, he had struggled to find that connection with other people.

Growing up in Franco’s Spain

Fascism played a huge role in Jordi’s formative years. He spent the first 12 years of his life growing up in Catalonia under Francisco Franco’s Spanish dictatorship, at which time, his culture operated only underground. In public, Catalan couldn’t be spoken, Catalonian songs couldn’t be sung, and even gatherings were prohibited. Jordi, his family, and his community were isolated and shunned by the Spaniards.

“When I was a child, I was talking in Catalan to one of my friends in the street, and somebody shouted ‘speak in Christian!,’” he recalls. “This is one way they would insult you. They meant you are a barbarian if you speak this language.”

He remembers choir practice vividly because someone always had to keep watch out on the street. “If somebody passed by, we would switch to a Spanish song,” he recalls, before adding: “That feeling of oppression was very vivid, and it influenced my way of looking at the world from a very early age.”

So when Jordi felt accepted by a humble wasp, who had an entire colony to protect but still marked him as safe, it resonated with him on a deep level.

“Fellow animals are just like us. They can judge situations, they can recognise good intentions,” he said. “I understood so much from that interaction. What it means to protect each other, what it means to judge each other, to communicate between species. It made me realise ‘ok I can’t just be an observer of the animals, I have to be a protector now.’”

A few years after the wasp interaction, Jordi left behind his academic career as a zoologist and decided to become an “animal protectionist,” working as an activist and campaigner.

He believes that one day, the lives of fellow animals everywhere can truly get better.

“When we see the system of exploiting animals, it is not how things should work,” he says. “If we challenge it, we will prevail.”

Again, the belief is rooted in his own childhood experiences. In the 1980s, democracy came to Spain, and Catalonia was reinstated as an autonomous region. The situation gave hope to millions of people, including Jordi.

This belief that things can get better has led Jordi to some hugely impactful wins in his career. While he started off inspired by wasps, his work in animal protection has led him to all sorts of animals, from dogs to foxes to bulls.

In the UK, for example, he helped to enforce the Hunting Act 2004, working with the League Against Cruel Sports (which is commonly referred to as simply the League), to secure illegal hunting convictions. After that, he travelled back to his native Catalonia to help pass a ban on bullfighting. As a lasting symbol of Franco’s oppressive fascist regime, the issue was close to his heart in more ways than one. His contributions paid off; Catalonia successfully banned bullfighting in 2010.

But there is still work to be done. Outside of Catalonia, the bullfighting industry persists in Spain. And in the UK, there were at least 550 illegal hunts in 2018. Jordi maintains that these activities still happen because they are tied to heritage and national identity. The world is changing dramatically, and for some, holding onto traditions, no matter how cruel they are to fellow animals, helps them keep a sense of self.

So in the interest of helping British society move past hunting and embrace a cruelty-free future, Jordi eventually circled back to the League after his anti-bullfighting work. In 2016, he became the organisation’s Head of Policy and Research. But, while the role at the League did end up advancing his animal protectionist career, it wasn’t quite in the way he expected. 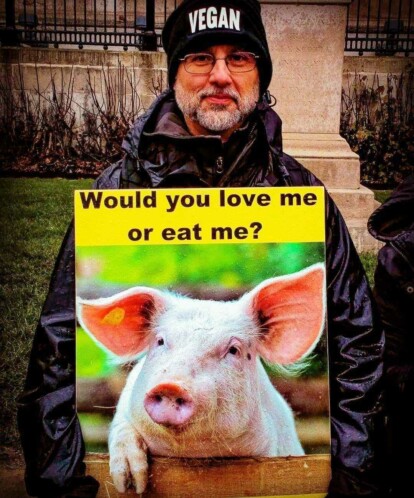 When Jordi re-joined the League, like many other employees, he was enrolled on a pension scheme. When he looked into that scheme, he found ongoing investments in companies that engage in animal testing, as well as petrol and tobacco corporations.

This situation, unfortunately, isn’t unique. Last year, one study found that pension funds invest £2000 in fossil fuel companies for every single person in the UK. And 2020 research suggested that at least six of the world’s biggest pension funds are associated with companies that engage in animal cruelty.

But for Jordi, it wasn’t enough to just accept this truth. He wanted a situation that contradicted his vegan values, and indeed the premise of the non-profit organisation changed urgently. At first, he tried to make a difference from the inside, but this eventually resulted in him being let go. In response to his dismissal, Jordi commenced legal action, and, in a groundbreaking and unprecedented verdict, the case, which settled out of court in his favour, confirmed that ethical veganism is protected under the UK’s Equality Act.

The news went viral and gave Jordi the biggest platform he had ever experienced to help people understand his vegan and animal protectionist message.

“Two years ago, there were more than 1,500 articles in 67 different countries,” says Jordi. The story even reached an Evangelist priest in a small town in Alabama, who gave a sermon on my situation, he recalls. He notes that he had support from vegans, of course, as well as environmentalists and many others who had felt discriminated against for their ethical beliefs. But many right-wing commentators were angry. “People that don’t like progressive people like myself, they wanted to talk about it as an example of how crazy the world is,” he explains.

“Like, ‘this guy in Britain is doing this, how ridiculous. Obviously he is going to lose, because veganism is a fashion, how can it be a belief? Look how crazy these guys have gone, they’ve lost their minds.’ But then I won,” he says. “And then there was a shift to ‘look how bad society has ended up being.’”

The changing face of veganism

But like every situation he has ever been faced with in his life, Jordi looks for hope. And this time, it didn’t come from a wasp but a comedian. David Mitchell, who has starred in comedies like Peep Show and That Mitchell and Webb Look, wrote about Jordi’s legal case for a column in the Guardian. Mitchell isn’t vegan, but in the article, which was written ahead of the tribunal, he acknowledged that Jordi had a point.

To Jordi, Mitchell’s piece represented a huge shift and victory: veganism, and his long-held belief that all living creatures have a right to life and fulfilment, were no longer on the fringes of society. Like the people of Catalonia, it was acknowledged, accepted, and respected by many.

“David Mitchell was the perfect example of somebody reacting from neither side, looking at it and thinking ‘this is a sign that perhaps we should take these people seriously. We’ve been ignoring them, I’ve been ignoring them, but perhaps I shouldn’t,’” he notes. “So that means something also happened in the population in general, people realised ‘there has been a shift here. It’s grown enough now that we can’t ignore it.’”

After the case, Jordi buried himself in writing. He’s still passionate about animal protection, but now, he wants to help shape the future of veganism and ensure the main core of the movement, respect towards animals, is always protected.

As it becomes more popular, Jordi worries the vegan message may become diluted. After all, with more meat companies, like Burger King, for example, launching new plant-based products all the time, the lines are blurring. That’s not a reason not to welcome positive changes, but perhaps someone needs to keep an eye on which direction the movement is going, Jordi maintains. Is it about profit, or is it about respect for animals and the planet? Because it should always be the latter.

“That’s what I’ve decided is going to be my role at the moment, I’ve been vegan long enough and I can see the movement growing,” he says. “I can see things happening now that didn’t happen before. Things that I feel are more dangerous and we should be aware of. Now that people know me, they want to know my opinion. I have an opportunity to express it and people might listen.”

To read more about Jordi and his views on what it means to be an ethical vegan, you can read his book “Ethical Vegan: A Personal and Political Journey to Change the World.”