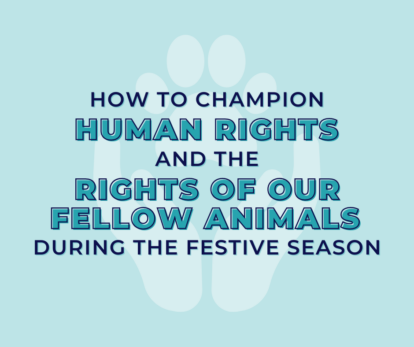 Today’s blog is inspired by the theme of this year’s Human Rights Day on Saturday 10th December 2022: Dignity, Freedom and Justice for All.

It’s also important to note that this year’s Human Rights Day marks the beginning of a year-long campaign to recognise and promote the 75th anniversary of the Universal Declaration of Human Rights (UDHR).

The Universal Declaration of Human Rights enshrines the rights of all human beings to dignity and equality. Although this declaration has helped to expand human rights protection worldwide since 1948, the United Nations warns that the UDHR “has been under a sustained assault over recent years” and that “Whenever and wherever humanity’s values are abandoned, we are all at greater risk”.

Like the United Nations, we believe at Ethical Globe that the solutions to many of the world’s crises are rooted in human rights. We also believe that dignity, freedom and justice for all should extend to our fellow animals too.

Sentience unites us, as does the desire to avoid suffering and live freely. Throughout history, different forms of human and animal oppression have been deeply interconnected. We “other” animals to justify exploiting, abusing and killing them, but the same language is used to “other” marginalised groups of humans too and thereby justify exploiting and hurting them too.

The Festive season is a time when we talk about “peace on Earth”, “goodwill to all”, taking care of those less fortunate than ourselves, celebrating love and community, and optimism for the year ahead.

So, with these values and the rights of dignity, freedom and justice for all front of mind, how can we, as ethical businesses, maximise the rights of our fellow animals and humans during the Festive season? Here are five ideas.

Food has always been at the heart of human celebrations, and the Festive season is no different. But behind the warm, cosy images of families sitting down together to eat, drink and be merry, there is a vast industry of animal suffering.

In the UK alone, approximately 14 million turkeys are slaughtered annually as the main centrepiece of Christmas dinners up and down the country. Around 46 million turkeys will already have been killed this year for Thanksgiving dinner in the US. Ninety percent of these birds are reared for their flesh in windowless sheds and are so unnaturally large due to selective breeding that they endure a life of agony.

Due to the demands of slaughtering so many turkeys for one occasion, many are not properly stunned and die a slow and terrifying death, fully aware of their suffering until the end.

Vast numbers of pigs, cows, chickens, rabbits, guineafowl and many other farmed animals suffer and are slaughtered in the name of celebration and peace on earth.

Even worse, it’s estimated that 26% of all of the animals slaughtered for their flesh end up as waste in landfill.

As vegan businesses, we have the challenge and the opportunity to present people with food choices that don’t necessitate suffering. It’s about breaking down the “nut roast” stereotype and showing how exciting, tasty, colourful, fresh and enjoyable vegan food can be.

If you run a food-focused business, you might want to feature some recipes on social media or in your festive newsletter or raise awareness about campaigns highlighting the suffering of animals over the festive period.

2.      Be mindful of how some of our other fellow animals suffer due to festive traditions

Reindeer, horses, donkeys, and even camels are sometimes used as attractions at Christmas fetes. Puppies, kittens and other animals sold as pets are bred and smuggled in vast numbers to be given as Christmas presents, only to have lost their appeal by New Year. Many end up neglected or abandoned.

Thousands of animals are experimented on by companies that produce Festive cosmetic gifts. In the UK, there are annual concerns that the Boxing Day Hunt continues to be a front for illegal foxhunting.

Many people are unaware of these issues, or they choose not to examine them too closely.

Think about what products and services you can promote for people to enjoy a “Christmas without cruelty” or similar message covering the entire festive period. If you run a rescue organisation for animals, for example, you might want to ask for donations to give the individuals in your care a happy, joyous experience rather than being exploited for human entertainment. If you sell cruelty-free, vegan cosmetics, you could create your own gift box or flexible gifting options.

If you run festive events, make sure that they don’t include any animals. Also, make a point of refusing to market at events where live animals feature in any way. 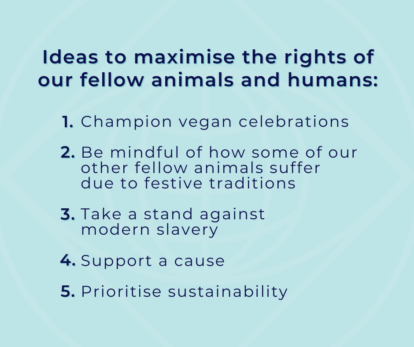 The festive season isn’t all tinsel, warm feelings and family reunions. This time of year can see a sharp increase in modern slavery. People want affordable gifts, putting pressure on supply chains to make more products for less. This means workers are more likely to be exploited.

Even in countries with strict employment laws, businesses are more likely to rely on temporary staff who may not have the same protections around their pay and hours as permanent staff.

In some parts of the world, some groups of workers have few, if any, protections. Many gifts under the Christmas tree each year are made by children working in hazardous and exploitative conditions, many of which are largely invisible because they occur so near the beginning of the supply chain.

Issues such as trafficking, criminal and sexual exploitation, forced labour, forced marriage and debt bondage are all prevalent.

As business owners, it’s vital that we all do our due diligence and research every step of the supply chain to see how workers are recruited, paid and treated. Raise awareness about potential exploitation among your workers so they can flag issues if they become aware of them.

You’ll need to think about the impact of your products and services on workers over the festive season. For example, are you really able to offer next-day delivery without harming anyone?

Let workers know what you’re doing to protect them or share what businesses in your supply chain are doing to ensure fair and healthy working conditions.

According to a recent survey, 88% of people want brands to help them live in a more environmentally-friendly and ethical way. Another survey revealed that 91% of people are likelier to switch to a brand that supports a good cause, given similar price and quality.

In particular, people are more likely to support a cause with which they have close personal experience, either directly or through a friend or family member.

The festive season tends to see an increase in cases of domestic violence, demand for food banks, isolation and loneliness (especially among older people), poverty, mental health crises, the abuse and neglect of animals, drug and alcohol abuse, rape and sexual assault, and more.

It’s likely that some of your customers or supporters are affected by one, if not more, of the issues listed above, especially at this time of year. If your vegan organisation supports a specific cause, make sure you tell people about it and share how they can get involved or make a donation.

It’s important to be authentic about what you support and why. People will be able to spot a mile away if you’re trying to piggyback on an issue for social media likes, but they’ll lend their weight to any issue for which you’re a passionate advocate.

Actively and passionately supporting a cause through your vegan organisation is a practical way to honour the Human Rights Day theme of dignity, freedom and justice for all. In particular, if you’re involved with any form of activism, then this is a great time to tell that story.

According to The Chartered Institute of Marketing, 64% of people want businesses to be more transparent about the impact their Christmas products and services have on the environment.

Despite the rising cost of living, many say they are willing to pay more for sustainable festive products. Shoppers are changing how they behave, reusing their decorations, shopping locally, buying artificial Christmas trees, and looking for products with minimal packaging.

If your vegan organisation can help people to live more sustainably, don’t be shy about letting them know.

People are looking to businesses for ideas about how to enjoy the festive season without leaving mountains of waste behind. What are you doing to make your products and services more sustainable? Initiatives to reduce packaging, go zero waste, lower your carbon footprint, help people become ethical consumers, etc., can all make a difference.

There’s no doubt that the issues above are relevant all year round, not just during the Festive period. As vegan businesses, we are already paving the way for more ethical practices built on kindness, compassion, dignity, freedom and justice for all.

Now is the time of year when people are potentially more open to these messages of peace and goodwill. We must do what we can to lead by example, to show that exploitation of any kind is only ever a choice, never an inevitability. Get people to embrace this realisation over the Festive period, and the hope is it will be the gift they remember for years to come.