Home / Blog / Five vegan transformation stories: From the slaughterhouse and animal farming to a life of animal activism

Five vegan transformation stories: From the slaughterhouse and animal farming to a life of animal activism 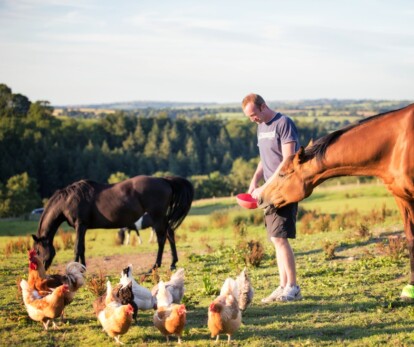 Singer and animal rights advocate Paul McCartney once famously said, “If slaughterhouses had glass walls, we’d all be vegetarians”. But it’s not just slaughterhouses that hide suffering and exploitation away from public view – farms, dairy operations and others centred on animal agriculture are complicit too.

Maybe if they had glass walls, we’d all be vegan…

But what about the people that work in these environments? They do see what happens behind closed doors. Are they immune to the suffering they see? Probably not.

Research from 2009 found that when a slaughterhouse is present in a community, crime rates go up, especially arrests for violent crimes, rape and other sex offences. Violence is normalised.

More recent research from July 2021 reported that slaughterhouse workers have a higher prevalence of mental health disorders such as anxiety and depression, and are more likely to exhibit violent anti-social behaviour and “maladaptive” coping mechanisms, such as abusing individual animals before and after they are slaughtered.

Slaughterhouse workers are more likely to experience cognitive dissonance (when their beliefs and behaviour don’t align or their values clash) and post-traumatic stress disorder (PTSD), as well as turning to substance abuse as a coping mechanism.

It’s clear that many slaughterhouse workers pay a terrible price for what they do.

Some farmers experience similar distress about their own part in rearing farmed animals for slaughter. There are many examples of farmers who have walked away from animal agriculture because they can no longer cope with the dissonance between their livelihood and their beliefs.

Today’s blog is about a few individuals who have left the slaughterhouse or animal farming to become passionate animal activists and vegans.

Jay Wilde grew up with the expectation that he would take over his father’s farm but it didn’t fit well with his values as a vegetarian. Although Wilde’s father initially ran the farm as a dairy operation, he switched to farming cows for their flesh in 1997.

Jay struggled with taking calves away from their mothers as a dairy farmer and says that every time he took a cow to slaughter, he felt like he was betraying an individual he had come to know and love and who had put their trust in him. He describes this experience of farming as “soul-destroying” and his wife Katja says she could see it was slowly killing him.

When Wilde’s father died in 2011, the farm passed into Jay’s hands. For some time, he wrestled with how to stay on the farm and make a living without exploiting other animals. A chance encounter with The Vegan Society and their Grow Green campaign alerted him to the possibility of exclusively farming plant foods.

In 2017, the majority of Jay’s herd of cows was rehomed to Hillside Animal Sanctuary; 17 cows remain as Bradley Nook Farm residents, grazing the fields. Wilde says he felt tremendous relief once the “burden of responsibility was lifted” and he knew the cows could enjoy their lives without the threat of slaughter or being separated from their families.

Jay and Katja are now developing Bradley Nook Farm as a permaculture farm and vegan cooking school. At the end of 2020, they launched their own oat milk as a partner of the Refarm’d brand. Their journey is the subject of the BAFTA award-winning short film 73 Cows.

When Renee King-Sonnen married her husband Tommy in 2009, she was transplanted from suburbia into a family that had worked on cattle ranches and in slaughterhouses for generations. She loved the non-human animals on the ranch and enjoyed caring for them but it was a strange new world for her.

In an effort to get her more involved with ranch life, Tommy bought Renee a two-month old orphaned calf, Rowdy Girl, to bottle feed. But nurturing Rowdy Girl allowed Renee to see that cows are sentient beings with rich emotional lives. Over time, Renee became increasingly distressed when the cows were taken for slaughter, especially the calves. She would watch the terror and hopelessness of their grieving mothers and knew she had to make it stop.

In 2014, Renee became vegan. Recognising that his wife was revolted by rearing cows for their flesh, Tommy decided it would be best to sell-up and leave the ranching life. But Renee had a different idea – what if he sold the herd to her at a discounted price and they turn the ranch into a sanctuary for farmed animals? With the help of compassionate vegans from around the world, Renee crowdfunded this dream in 2015 and Rowdy Girl Sanctuary was born.

Renee and Tommy – both now vegans – run the sanctuary together, as well as the Rancher Advocacy Program, which helps ranchers to leave animal agriculture but keep running profitable properties.

You can find out more about Rowdy Girl Sanctuary at: rowdygirlsanctuary.org

In 2009, the library where Andrea worked closed for remodelling and she needed to find new employment. She decided to apply for internships in the dairy industry, wanting to understand how operations worked. Having been a vegetarian for 20 years, she was shocked at the exploitation and suffering she encountered and soon began rescuing goats meant for slaughter.

By 2011, she had settled on the idea of changing the dairy industry from within by setting up a slaughter-free goat dairy farm. She decided she would shun unethical practices and show there was a kinder way to farm.

Over time, however, Andrea recognised that slaughter-free animal agriculture is still exploitative and that she was a cog in that machine.

In 2014, she and the rest of the staff on the farm went vegan. She closed the farm and sold all of the equipment to fund Broken Shovels, a sanctuary for exploited farm animals, as well as The Sanctuary School, an outdoor education centre for three- to five-year-olds.

You can follow the work of Andrea and the Broken Shovels team at: https://brokenshovels.com/

Jennifer and Rodney Barrett started out as chicken farmers, raising and sending 100,000 chickens to slaughter every 52 days. They also raised cows for their flesh.

Both described themselves as “animal lovers” but hadn’t made the connection between the chickens and cows they were farming and the suffering those beings endured, both throughout and at the end of their lives.

In 2016, Rodney began having serious physical health problems, while Jennifer was struggling with depression and obesity. They started learning more about the food they were eating and realised that consuming animals for their flesh was contributing to their poor health. The couple decided to take part in a challenge to eat a plant-based diet for three weeks and felt amazing.

Jennifer says that it was at the end of this experience that she entered the chicken shed and realised all of the individuals in front of her were scheduled to die the next day. But what for? This was the question she couldn’t shake. Eating animal flesh and secretions wasn’t contributing to her health or that of her family; maybe it was hurting other people too.

And what about the chickens and cows? They were clearly sentient beings. How could the Barrett’s justify living as vegans but continue to exploit other animals? The answer was, they couldn’t!

Jennifer wrote to Renee King-Sonnen and soon gained her friendship and the support of the Ranchers Advocacy Program. With this help, the Barretts were able to shift from animal agriculture to farming mushrooms and hemp.

You can read more about their experience here: https://freefromharm.org/animal-farmer-turned-vegan/jennifer-barrett/

Doug Maw used to be a chicken farmer and slaughterhouse worker. He had jobs in various areas of the slaughterhouse from the “gutting room” to catching the animals as they came into the abattoir, to time on the kill floor.

In a moving piece on the SARX website, Maw talks about the “carnage and chaos” of the slaughterhouse, of witnessing terrible atrocities and countless sentient beings paralysed with fear or fighting with every fibre of their being against the terrible death in front of them. Maw also talks about the realities of how animals are murdered in slaughterhouses on his YouTube channel, Vegangelical.

Maw says that, at first, he was able to disassociate from what he was doing by “focusing on the physical aspects of the job”. However, he began to realise he was carrying a deep-rooted trauma. Violence became “normative” and he began getting into fights and confrontations in everyday life. He sunk into a deep depression, struggled with relationships and tried to end his own life on several occasions.

After reading Peter Singer’s book Practical Ethics, Doug Maw realised that he could never work in a slaughterhouse again but also that he had to become vegan and an advocate for farmed animals to help end their exploitation and unconscionable suffering.

Doug has spearheaded a number of animal rights petitions and appeared in TV shows, documentaries and films such as Eating Our Way to Extinction talking about the realities of animal agriculture and slaughterhouses. He’s also involved in many campaigns including the Million Dollar Vegan, slaughterhouse vigils, street outreach, organising activism events and festivals, hunt sabotage and more.

In August 2021, Doug hit the headlines. At the time, he was working in a Morrisons’ store in West Sussex, UK, when he became aware of a Morrisons Misery campaign by Open Cages, Animal Equality UK and The Humane League UK. The campaign aimed to get Morrisons to stop the breeding of so-called “Frankenchickens” for sale in their stores.

Frankenchickens are chickens who have been genetically manipulated to grow three or four times larger than their natural size in order to produce more flesh for sale. Many of these chickens suffer terrible deformities and are unable to walk due to the weight of their bodies. Their lives are full of unimaginable pain and suffering.

Maw signed the petition for this campaign and shared it on the Morrisons’ Facebook group for employees. He also campaigned outside of the store where he was employed. Morrisons began disciplinary proceedings against Maw before firing him in the autumn of 2021, but not before he helped to raise the profile of the campaign.