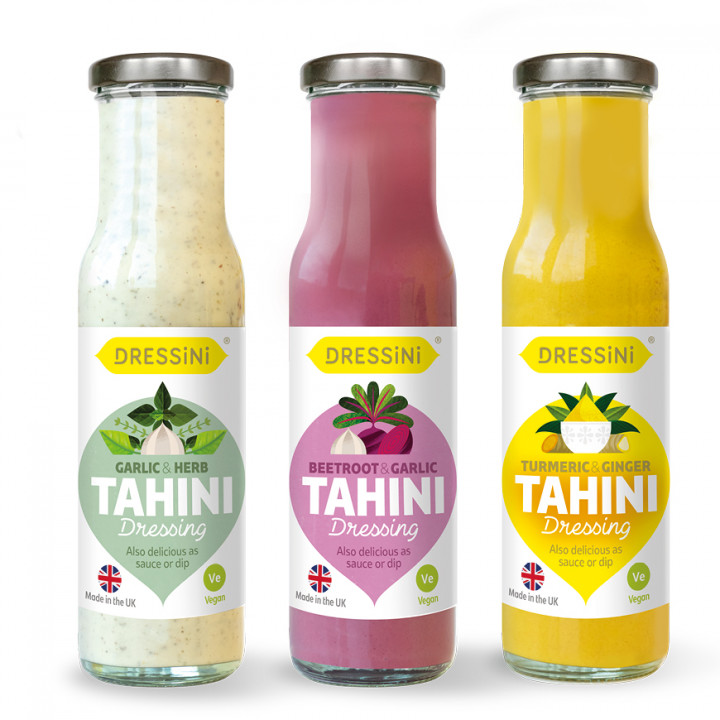 Our dressings are super versatile and were developed for use with lots of different dishes. They are perfect for getting creative in the kitchen: you can use them as salad dressing, as mayonnaise replacement, with veggies (e.g. roasted), as dip or even in warming rice dishes. They will always stay in season.

Dressini was created by Philipp Ertl, who is also the founder of Exceedinglyvegan.com, one of the most popular recipe blogs in the UK. So, Philipp made it his mission to make the amazing ingredient tahini more accessible for you.

Plant-based
Made in the UK
Contains sesame
Easy to use - just pour out of the bottle and enjoy as dressing, sauce or dip

Are all the products your entity (business, brand, organisation) produces and/or retails suitable for vegans? If no, then, unfortunately, you cannot register as we only accept submissions from 100% vegan entities.

Which of the following best describes you (professionals and sole traders) or your organisation?

Are you a Grassroots organisation (for projects, charities/NGOs)?

Are you a BAME (Black, Asian & Minority Ethnic) owned/run business/organisation?

What type of business/organisation are you?

What do you do to support or promote each of the causes you have identified?

Does your business/organisation have an ethical labour policy or code of practice (either formal or informal) which ensures fair labour practices?

Does your business/organisation have policies and practices which actively promote diversity and inclusion?

Is your business a member of the World Fair Trade Organisation?

Do you source products and/or ingredients from companies and suppliers that support fair labour practices?

As much as possible

If any of the products you produce and/or retail, or ingredients you use, have a sustainable production certification, please indicate which certifications apply?

Overall, how many of the products that you produce and/or retail, or ingredients you use, are certified by the sustainable production certifications listed in the question above?

Some (less than a third)

Are any of the products that you produce and/or retail, or ingredients you use, produced using sustainable production methods albeit uncertified?

Are any of the products that you produce and/or retail, or ingredients you use, free of palm oil?

Do you only use recycled or recyclable materials for packaging?

Is all of your packaging biodegradable?

Does your business, organisation or project follow a zero waste philosophy?

How many of the products you produce and/or retail, and/or the ingredients you use, are made in the country in which your entity (business, organisation) is based?

Many (one to two thirds)

Does your business support or give back to the local community in any way?

What was the motivation behind your brand, business or organisation? What did you want to change in the world?

Dressini was created by Philipp Ertl, founder of Exceedinglyvegan.com, one of the UK’s most popular vegan blogs. Before Phil became vegan, he was a chain smoker who wasn’t happy with his life. One day he realised he was holding the key to happiness in his own hands. He decided to turn his life around, quit smoking and look after himself more in all aspects of life. This led him to a plant-based lifestyle. Inspired by the benefits of vegan foods, he decided to be the change he wanted to see in the world and so he started a vegan recipe blog. Philipp’s goal has always been to make his vegan recipes as accessible as possible. That’s why he almost entirely uses ingredients found in local supermarkets for his recipes. Dressini follows the same idea of making plant-based dishes more accessible by offering a nutritious alternative to dairy-based dressings.

Who is the team behind your brand, business or organisation?

Dressini was founded by Philipp Ertl, who regularly develops and shares delicious vegan recipes with his 170,000 followers on social media. Together with his team of experts in marketing and sales, finance and tech he made it his mission to make the amazing superfood tahini more accessible to consumers.

What one thing about your brand, business or organisation would most surprise us or is not known outside of your team?

The name Dressini was invented by Philipp and it’s a mix of the words dressing and tahini. He also designed the logo and packaging and his brother George designed the website.

If your brand, business or organisation could be granted one wish, what would you wish for?

That our dressings are sold in all major supermarkets across the UK to make the superfood tahini more accessible for everyone!

Is there anything else that you would like to share with us about your brand, business or organisation?

Try our dressings and see for yourself. We also have lots of recipes inspiration on our website and social media as well.

Get our free guide "10 Tips to Build an Ethical Plant-Based Business that Lasts".

Submit your email address. Check your inbox to confirm your request. Then lookout for a second email with the download link. Easy!