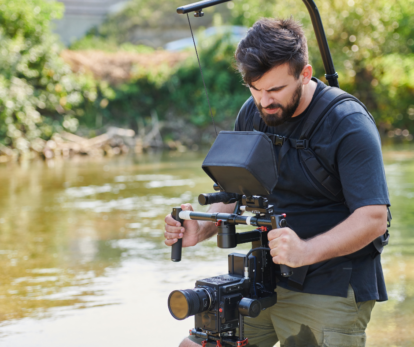 Over the last few decades, there have been several hard-hitting, must-see vegan documentaries that highlight some of the key concerns and issues driving the vegan and animal rights movements.

Below, you’ll find ten such vegan documentaries (listed in chronological order based on their release date). These documentaries take various approaches, from tackling diet-related human health crises in specific countries to exploring how industrial animal agriculture is core to the ecological crisis.

Many of these films contain distressing footage, making them tough to watch in places. At the same time, they challenge us not to turn away but to seek fairer, less destructive and different ways of living and eating. Finally, they carry messages of hope and possibilities for a more sustainable future:

Using undercover footage, it is unflinching as it lays bare some of the many atrocities humans routinely commit against other animals in the pursuit of profit.

Narrator Joaquin Phoenix observes in the documentary, “If slaughterhouses had glass walls, we would all be vegetarian”. Earthlings provides the glass walls.

Forks over Knives is a documentary film that takes a look at the burgeoning health crisis in America, where the current generation of children is the first in decades predicted to die at a younger age than their parents.

The documentary explores the rise of illnesses such as type 2 diabetes, hypertension, heart disease and cancer and how the Western diet is fuelling this. It also exposes the financial gains to be made by big brands when approximately 50% of the population is on some kind of medication to control diet-related health issues.

Forks over Knives follows the personal journeys of Dr T Colin Campbell, a nutritional biochemist from Cornell University, and Dr Caldwell Esselstyn, a former top surgeon at the world-renowned Cleveland Clinic. On separate paths, their research has led them to the same conclusion that chronic diseases, including heart disease and type 2 diabetes, can almost always be prevented – and, in many cases, reversed – by adopting a whole-food, plant-based diet.

During the documentary, several Americans put the idea of plant-based food as medicine to the test with incredible results.

The Ghosts in our Machine centres on award-winning photographer Jo-Anne McArthur, an animal rights activist who photographs, and thereby documents, the suffering of non-human animals in premises such as fur farms and slaughterhouses.

McArthur faces the challenge of getting her work in front of non-activist newspapers and magazines, being told to “make the work moving, not disturbing” if she wants a platform. But McArthur experiences PTSD as a result of the suffering she has witnessed and is unable to dull her images down to make them more palatable and less traumatic. Instead, she uses the documentary as a platform to bring her work to wider audiences.

Cowspiracy is a groundbreaking feature-length documentary about the devastating environmental consequences of animal agriculture, particularly the farming of cows for their flesh.

In Cowspiracy, filmmaker Kip Andersen explores why the world’s leading environmental organisations seem unwilling to come out and condemn the current industrial food system, especially animal agriculture. He also explores the power and influence of that industry.

Finally, the documentary offers a suggested path to global sustainability for a growing population.

What The Health comes from the award-winning team behind Cowspiracy, including Kip Andersen. Like Forks over Knives above, What The Health looks at the sharp rise in diet-related health problems due to the current Western diet. It explores the influence that big food brands have in the world, particularly when lobbying governments or funding nutrition research.

This documentary film is described as exposing “the collusion and corruption in government and big business that is costing us trillions in healthcare dollars, and keeping us sick”. Kip Andersen also asks why America’s leading health non-profits are staying silent despite the growing body of evidence that the Western diet is a leading factor in the increase of cases of diabetes, cancer, heart disease, arthritis and more.

For decades, the UK farming industry has pedalled the image of happy animals such as pigs, sheep, chickens and cows roaming free across verdant pastures and vast, rolling hills. This reassures consumers that they may buy animal flesh and secretions with a clear conscience, believing the animals on their plates lived full and content lives before being humanely slaughtered.

Land of Hope and Glory pulls back the curtain to reveal the brutal realities of animal agriculture in the UK. All the farms featured in the document supplied animal products labelled as free-range, organic, high welfare, Red Tractor approved and RSPCA-approved.

It shows how farmed animals live and die in their millions every year and the true scope of the suffering taking place on an industrial scale.

Milk, primarily cow’s milk (and related dairy products), is seen by most people as being healthy and nutrient-rich. The Milk System challenges this perception, exploring the potential impact of dairy consumption on human health and the growing evidence that it might contribute to illnesses such as cancer.

The Milk System also puts the dairy industry under the microscope, looking at its environmental impact and the immense suffering animals used by the industry endure. This suffering is core to the documentary – cows are forced to endure horrific lives where they are confined, impregnated, pregnant for most of their existence and have their newborn calves taken away from them, causing clear trauma and distress.

Who profits most from the industrialised dairy industry, and at what cost? What are the possible alternatives? Why are suicide rates so high among dairy farmers? The Milk System asks these questions and more.

You can currently watch The Milk System on Netflix

This documentary film, directed by Oscar-winning filmmaker Louie Psihoyos and executive produced by A-listers James Cameron, Arnold Schwarzenegger, Jackie Chan, Lewis Hamilton, Novak Djokovic, and Chris Paul, explores how and why some of the world’s top-performing athletes have switched to plant-based diets.

The Game Changers challenges the long-pushed marketing messages that to be strong and perform at our physical peak, we need a protein-packed diet sourced from animal flesh. It highlights the ground-breaking science that shows the power of plant-based proteins and even reveals that Roman gladiators – an enduring symbol of brute strength and physical prowess – ate very little animal flesh if any.

As Patrik Baboumian, a world-record-holding strongman, says, “Someone asked me, “How can you get as strong as an ox without eating meat?” and my answer was, “Have you ever seen an ox eating meat?”

Seaspiracy is a documentary film produced by Kip Andersen about the various environmental issues that affect the world’s oceans, including plastic pollution, ghost nets and overfishing. It looks at the catastrophic impacts on shark, whale, dolphin and turtle populations and rejects concepts such as sustainable fishing as a solution.

“When food costs the Earth, who pays the price?” That’s the core question tackled unflinchingly by Eating our way to extinction (narrated by actress Kate Winslet). This documentary film takes the audience on a cinematic journey worldwide, telling the story of the people and places most directly impacted by the impending ecological collapse.

Although the window to avoid or reverse catastrophic climate change is “intimidatingly small”, Eating our way to extinction carries a clear message that avoiding the flesh and secretions of non-human animals will have a profound impact on creating a sustainable future for our planet.

Looking for more resources about veganism? Check out our growing list of useful resources for the ethical vegan community.